EPL: Chelsea, Manchester United to the four after huge wins 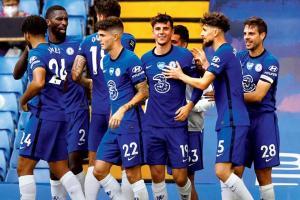 
Manchester United and Chelsea sealed Champions League places on Sunday as Bournemouth and Watford fell through the trapdoor on a dramatic final day of the English Premier League season.

United finished third after a nervy 2-0 win in a Champions League shootout against Leicester while Chelsea ended in fourth spot after beating Wolves 2-0 thanks to two goals on the stroke of half-time.

At the other end of the table, Bournemouth and managerless Watford dropped to the Championship while Aston Villa fans breathed a huge sigh of relief after they got the draw they needed at West Ham. Leicester, in fifth spot, will play in the Europa League next season where they will be joined by Tottenham, who drew 1-1 with Crystal Palace to leapfrog Wolves.

Mason Mount whipped in from a free-kick to give Chelsea the lead and the home side went further in front almost immediately, when Olivier Giroud slid home. United, whose form has dipped in recent weeks after they pulled themselves back into contention for the Champions League, were locked at 0-0 at half-time at the King Power Stadium.

But they finally broke the deadlock in the 71st minute, when Bruno Fernandes scored from the penalty spot after Anthony Martial was upended. Jesse Lingard scored late to seal the win.