A musician in London

The daughter of famous actors is living like a nobody in England, making her career as singer. Shruti Haasan on chasing the big dream, outside of Bollywood. 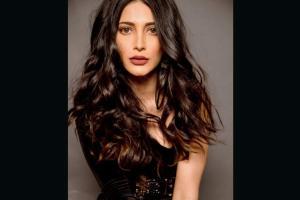 
To watch Shruti Haasan's vidoes on IGTV, where she sings English "alternative pop", feels strange. We know her as legendary performer Kamal Haasan and actor Sarika's daughter. We have seen her as heroine in Telugu, Tamil and Hindi films. And, though she has always been a singer, even winning best female playback in 2014 for the Telugu song, Junction Lo in Aagadu, her musical career is now playing out in a different universe.

For the last one year, Haasan, 33, has performed across London with her all-women band, comprising a cello and piano player, including at five-star club The Ned, and The Half Moon in Putney. "I was around London Bridge during the blasts. They had shut everything. I had to walk 40 minutes to take a train, in my performance clothes, carrying my gear. The only thought in my head was, 'I love singing," she says. "Nothing has come easy. You will say, 'What! You are Kamal Haasan's daughter'. But it's true. I do everything, run my life out of a London apartment. When you get home from a long day at rehearsal, the food isn't ready. No one to open the car door, cook me food, touch up my make-up. It's not like it was in India."

Haasan's music is inspired by the artistes she grew up listening to—strong female musicians of the 1990s, all OG feminists. Think Tori Amos and Alanis Morissette. When you listen to her, you are struck by her big voice, and haunting, other-worldly vibe. She writes her own lyrics, mostly about life and feelings, and composes the music. The move to London, she says, has helped her disassociate with all that she is known for in India. She recalls how her first gig had a 50 per cent Indian audience. "They thought I would sing in Telugu or Tamil. At the end of it, they said, 'We like you, but WTF!'. But there were those who returned for the next gig. The Ned is a tough performance venue. The stage is right in the middle and it's an acoustical disaster. But we did it, we made it happen. You learn to work around stuff. I am finally performing in front of people who don't know me."

She hasn't given up on the movies, but they are few and far between. Tamil film Laabam opposite Vijay Sethupathi and the Telugu production Krack featuring Ravi Teja are up next. She is also part of Devi's cast, a short film starring Kajol, Neha Dhupia and Neena Gupta, about nine oppressed women who come under one roof to discuss their lives. "I get a lot of sh**, because I am a feminist who also likes to wear a push-up bra and wax my underarms," she laughs, "For me, feminism is about being a woman who is able to portray herself in a way she wants to be seen to herself. Devi says that if women can band together the way men do, we would be stronger."

As she gears up to return to return to London to record her first album, she is clear that music will come first. "I now ask myself, do I need to do this movie or can I say no." Haasan promises that later this year, Indian audiences will hear more of her music, along with live performances. But for now, she must be the wandering musician.

Next Story : The journey of a reluctant protestor