Indie publishers: A boon for writers

With small-scale publishers joining the race, is the future of the Indian writer in safe hands? 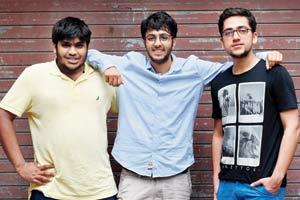 (From left) Ishaan Jajodia, Kabeer Khurana and Tanay Punjabi founded Bombaykala Books last year to launch books that were being ignored by the mainstream publishing industry

What does a 19-year-old know about publishing? This question would niggle any writer if somebody that young was tasked with editing, printing and distributing his/her book. Yet, when Mumbai-based author Kiran Manral was approached last year by Ishaan Jajodia, 19, at a college festival to publish her title with his fledgling publishing house, Bombaykala Books, something about his passion project made her immediately agree. "I have been published across the gamut," says Manral, whose previous works were released by Penguin Random House, Westland and Juggernaut. Having worked with all the leading houses, Manral says the takeaways have been different. "With bigger publishing houses, everything is well-oiled and they have a better distribution network. But, at the end of the day, they have targets to be met. The younger bunch are more passionate and willing to take risks. I think we should encourage people who are going out on a limb to do something new."

Manral's novel Saving Maya was published by Bombaykala Books in January this year, giving Jajodia and his fellow co-founders Kabeer Khurana and Tanay Punjabi, also 19, the much-needed boost to further their independent publishing project. They are not alone. On January 13, The Irrelevant Project, founded by Meghna Chaudhury and Alishya Almeida in 2016, with the aim of interrupting prejudice in the spaces of learning, got into the publishing space, when they launched five diverse feminists' books for little children. Bengaluru-based self-publishing start-up, Pratilipi, formed in 2015, is also spearheading a movement to provide a platform for writers, looking to publish in regional languages, like Hindi, Marathi, Bengali, Gujarati, Tamil, Telugu, Malayalam and Kannada. The founding team, which includes a young bunch of 28 and 29 year olds, also made it to the Forbes 30 under 30 2018 list. With mainstream publishing houses already having created a strong, reading market in the country, what's interesting to look at is why these niche publishing spaces, which are only growing by the dozen, have joined the race.

Giving writers their due
Back in 2014, New Delhi-based Dipankar Mukherjee, an IIT- Madras alumnus, launched a literary start-up called Readomania. In just three years, Mukherjee's brainchild has gone on to become one of the fastest growing independent, publishing houses in the country, having released over 40 titles already. "The idea was to focus on good writing, which is also commercially relevant," says Mukherjee, describing them as "middle of the list" titles. "In India, the larger houses only focus on literary or commercial fiction, but I felt that there was great writing potential in India, which was not getting the right kind of visibility." In the last few years, Readomania has released a range of titles. Though, none have gone on to become bestsellers, backing popular books like Sutapa Basu's Dangle and Padmavati, has forced others to take notice.

Jajodia, a student of art history and government at Dartmouth College, feels that when bigger publishing houses pick up books, they tend to "monetise" it. "Their approach towards the book will be based purely on the profits that they earn from it. So, if they believe something can sell one lakh copies, it will receive that much more attention, compared to a book that would sell only 20,000 copies. That's just the nature of the business. But, we weren't too happy about it," says Jajodia, adding that he found it unfair that great stories by better writers weren't receiving their due.

It's also one reason why debut writers are finding these newer spaces more lucrative. Pragya Bhagat, who published her new book, Yarn: An Interwoven Memoir, says, "Independent publishing houses like Bombaykala give new writers like myself an opportunity to be heard, based on the content of my work, instead of my social media presence or the number of followers I have. It's not been an easy journey, but with them, I felt like we were on that journey together."

Keeping it niche
Then, there are companies that are dabbling in publishing because they find it an interesting wheel to communicate a certain set of ideas. Naman Madaan, a member of The Irrelevant Project, says that the team has been conducting a host of activities, including workshops, to break stereotypes in children. The idea of publishing in-house books came about when they figured that stereotypes surrounding gender, class, caste and religion are also perpetuated in books for children. That's when they decided to come out with five illustrated books, which are based on a range of themes like consent and non-gendered dreams.

Aqui Thami and Himangshu S, co-founders of Bombay Underground, another platform that fosters independent publishing, describe themselves as a space for "social change". Today, they are doing a fair bit to provide a platform for zines. "It depends on when we have funds to bring out new material," says Himangshu. Their latest venture is a photo book by children from Dharavi.

Future forward
Niche or not, the biggest obstacle for small-scale publishing houses is steady funds. Literary agent Kanishka Gupta, who is the founder of Writer's Side, says the trick is to not get "too ambitious". "I think it's good for any publishing industry to have a robust indie publishing scene. Unlike the corporate multinationals, they are not as swayed by big ticket names and sales potential, and end up championing several important and neglected names," he says, adding, "But, only those indie presses will survive that have a very defined, focused vision and stick to that vision in the long term."

Next Story : When Mumbai's theatre and visual artists walked with state's protesting farmers