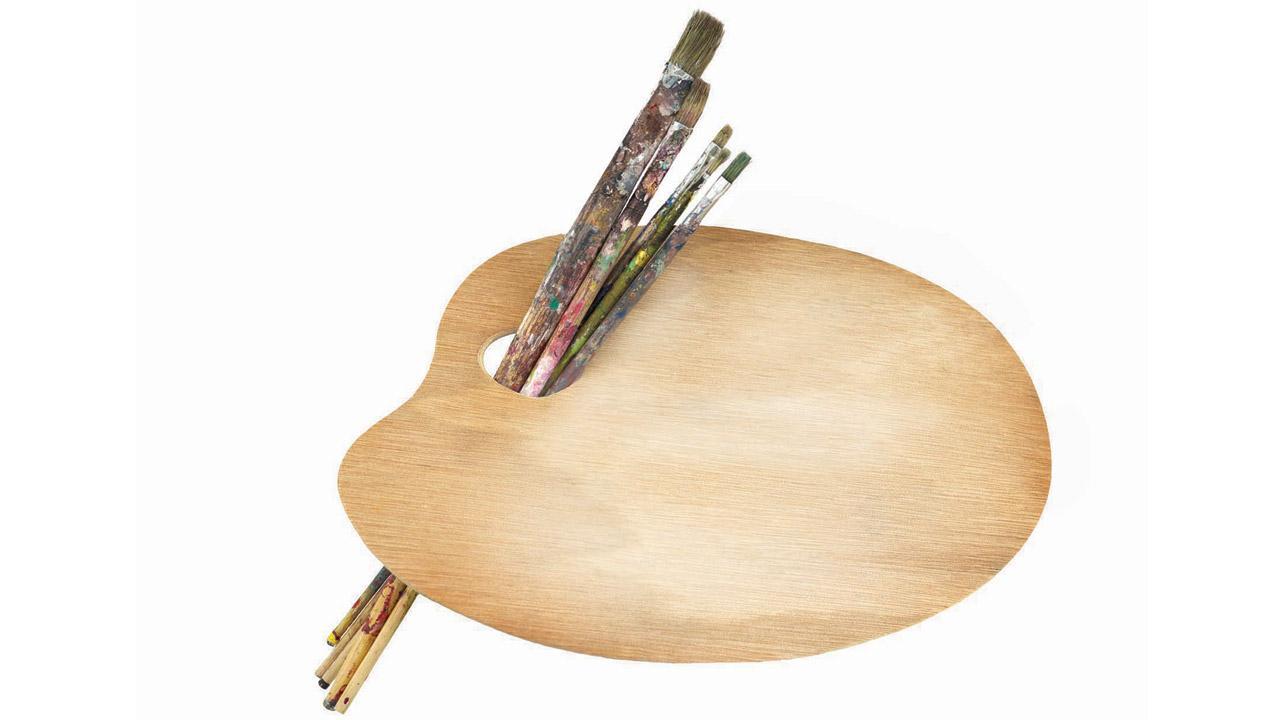 
For 10 years now, the Mumbai Gallery Weekend has become a marked event on the city’s art and culture calendar. This three-day-long affair—across the galleries in the city—engages with art aficionados through a series of exhibitions highlighting the best art created in India and beyond. The goal has always been to infuse new life into Mumbai’s art scene by bringing together potential art collectors and enthusiasts to expand the reach and importance of contemporary art. Originally scheduled for January, the Weekend was postponed this year due to the rising Covid cases last month. Remembering the first edition, Ranjana Steinruecke of Galerie Mirchandani + Steinruecke and spokesperson, Mumbai Gallery Weekend, tells us, “Our very first weekend was held at the Taj Lands End Hotel in Bandra, with a much smaller group of galleries sharing one large space—sort of like a mini art fair. In subsequent years, we moved the event to individual gallery spaces. This year, we have 24 participating galleries spread across Colaba, Kala Ghoda, Ballard Estate, Nariman Point, Breach Candy, Worli, Lower Parel, Prabhadevi and Bandra. There is an outstanding range of exhibitions to look forward to, that includes both modern and contemporary art from India and abroad.”

“The body of work displayed in this show has image transfers on teak wood that investigates the more personal side of Saju’s practice, representing his ancestral home and the multiple migrations undertaken by his family,” says gallerist Hena Kapadia. Blurring the lines between fact and fiction, the artist uses maps and maquettes on teakwood to represent the imagined settlements of his ancestors while paying homage to the refugees at the Zaatari refugee camp in Jordan and the systematic deforestation of the Amazon forest. He connects his work to politics, power and environmental concerns. He says, “Whatever happens today, there must be a link connected to the past. So my works connect the past and present through concept and methodology.”
>>>
Where: TARQ, Fort

Sosa Joseph’s Where do we come from?

Born and raised in a village in southern Kerala, in a house right by the river, the artist’s tryst with the riverine world becomes a visual exploration. Joseph says, “For us, it all began with the river. It flowed through us every day, every moment. This body of work is where my memory began. The river’s ecosystem inspired my imagination, intensified my experience of nature, informed my worldview, influenced my aesthetic, and even gave me my sense of colours and textures.” Besides the geography, the motifs seem to recall people and events she knew of, and therefore seem narrative in some sense, the canvases being landscapes of reminiscence.
>>>
Where: Galerie Mirchandani + Steinruecke 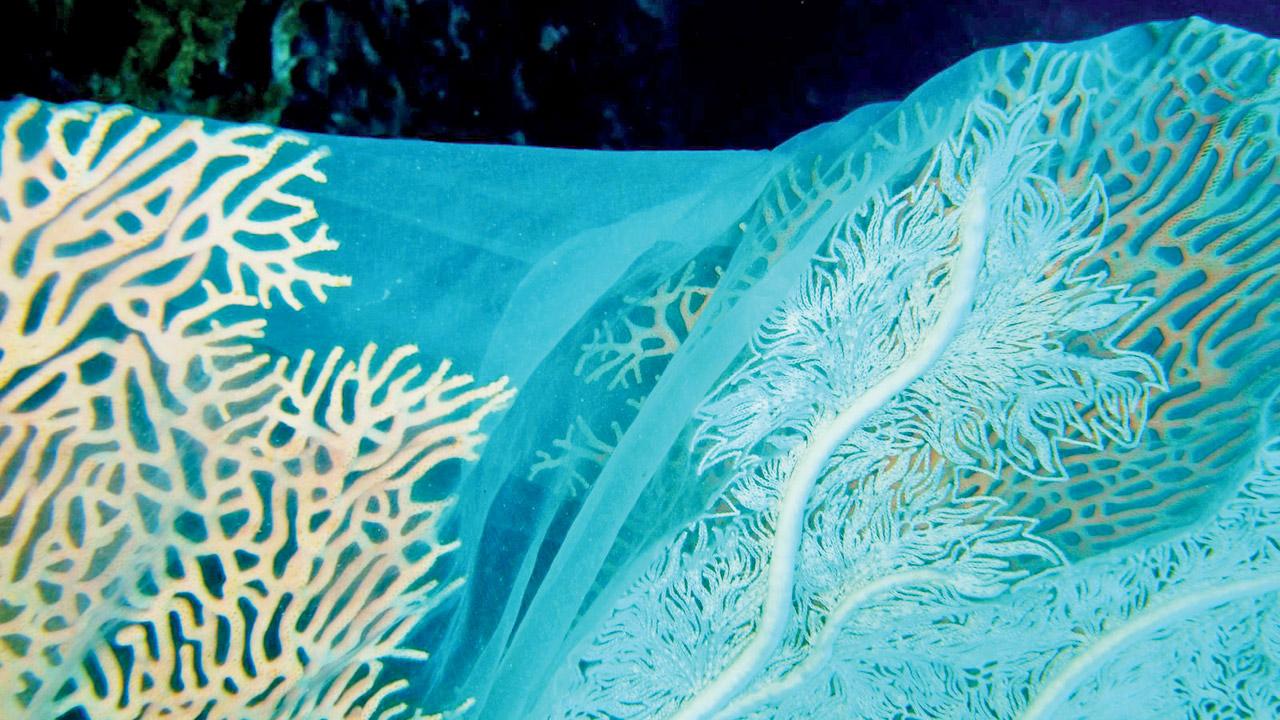 Jamaat celebrates its 23rd anniversary this year with works by Vaishali S and Alessandro Giuliani. As the story goes, on a diving holiday in the Maldives, Vaishali was inspired by the coral formations she saw there and created haute couture garments based on that inspiration. These creations earned her an invitation to the Paris Haute Couture Week last year. Vaishali and Alessandro decided to take these garments back to the Maldives, to 30m deep underwater and lay them against the corals. To their amazement, they found the sea life—shrimps, kissing fish, anemones, and even baby sharks—loved the garments and wanted to play amongst them. And Alessandro shot these stunning underwater photos, with the interplay of corals, garments, and sea life. Gallerist Pravina Mecklai tells us, “These photos have been backlit to give them an underwater feel and spotlight the garments. So the whole show is a stunning installation.”
>>>
Where: JAMAAT
What: Mumbai Gallery Weekend
When: February 10 to 13
Log on to: www.mum baigallery weekend.com

Ramesh Mario Nithiyendran’s The Mud and the Rainbow 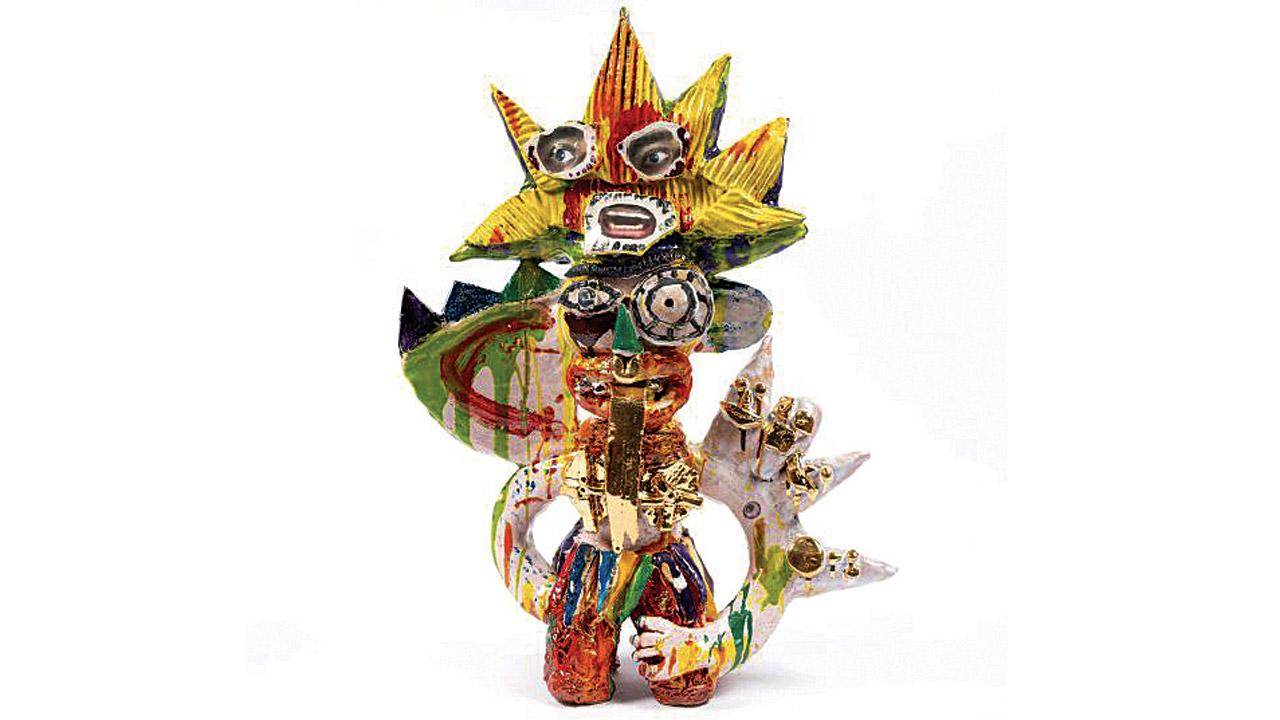 This solo exhibition of ceramic sculptures by artist Ramesh Mario Nithiyendran is his first in South Asia and gestures to a range of global histories that connect to the artist’s Sri Lankan ancestry. The artist explores global histories and languages of figurative representation and is interested in South Asian forms and imagery as well as politics relating to idolatry, the monument, gender, race and religiosity. He has worked imaginatively with sculptural materials including bronze, concrete, neon, LED and fibreglass, as well as conventional painting and printmaking materials and techniques.
>>>
Where: Jhaveri Contem- porary, Apollo Bunder 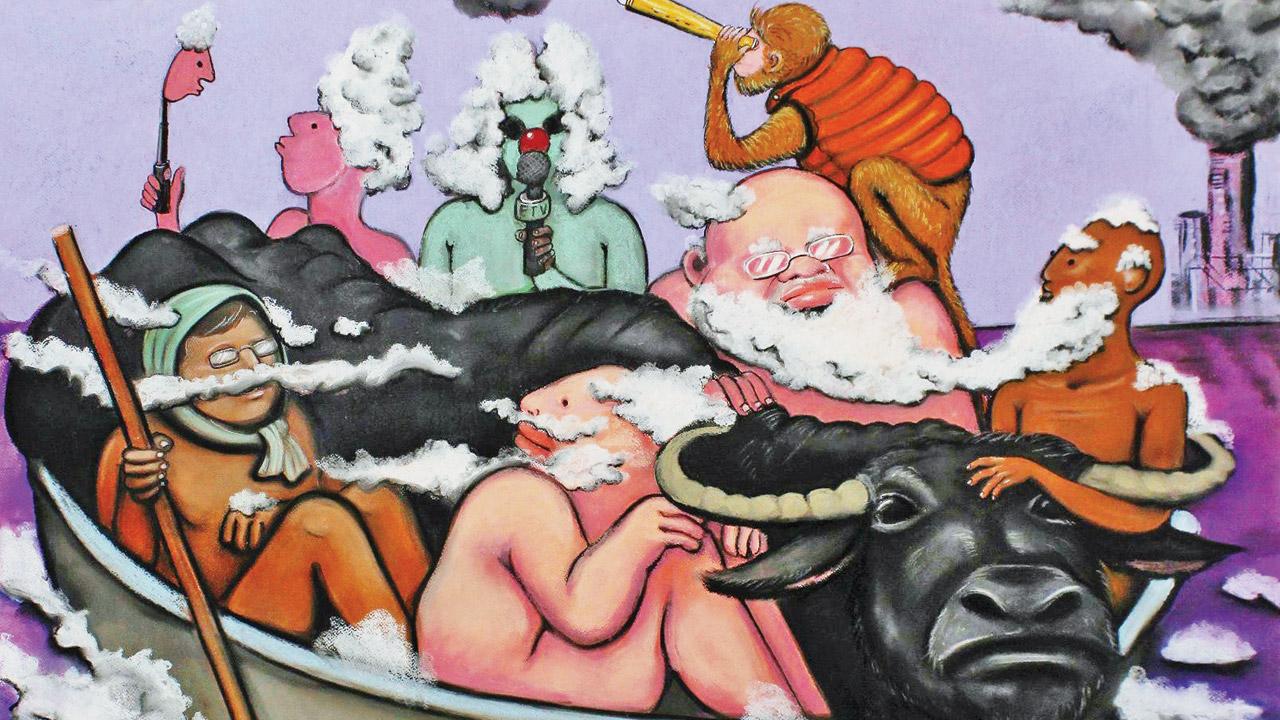 The artist’s first solo show is thought-provoking, yet witty. The surprisingly unexpected and subversive works are a probe into the existential dualities of the current multiplex cultural fabric. They are explorations of time now, overflowing with whimsical and fantastical characters that are a unique take on the underbelly of what is produced, consumed and trashed in today’s culture. Kararwal deconstructs these layers, rips them apart, then reconstructs works that plumb the depths of our hyper-consumer society. Gallerist Geetha Mehra says, “We have been following Siddhartha’s work for eight-nine years now and are thrilled to open this vivid and startling show. These witty artworks expose the shallowness and triviality via anthropomorphised creatures in a utopia with false prophets and fantastical characters.”
>>>
Where: Sakshi Gallery, Colaba 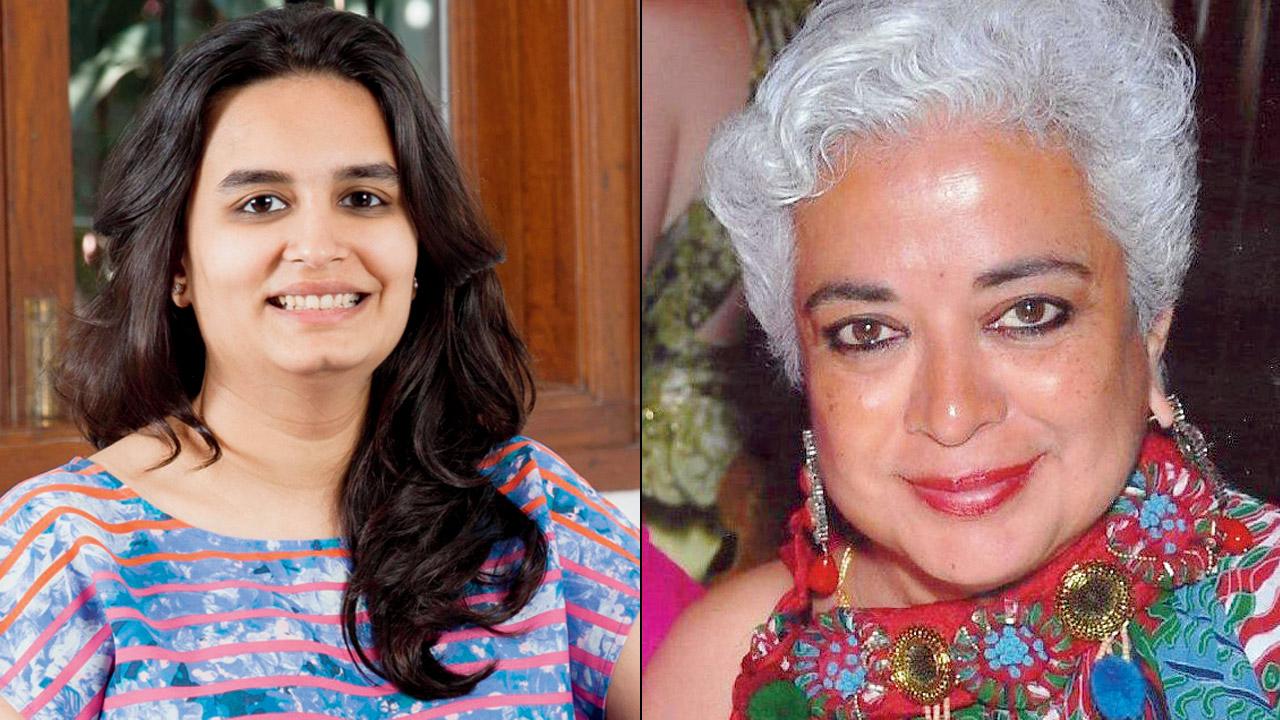 In anticipation of the India release of London-based artist Hetain Patel’s new film TRINITY in April 2022, Chatterjee & Lal will host an exhibition of the artist’s existing work covering 18 years of practice, much of which has never been seen before in the country. “TRINITY is the final part in a trilogy and the earlier films, The Jump and Don’t Look At The Finger, have already received significant recognition globally. TRINITY contains a gripping narrative with amazing cinematic effects and an arresting score; we can’t wait to share it with Mumbai audiences,” say gallerists Mortimer Chatterjee and Tara Lal. The exhibition includes photography, video and documentation of performance.
>>>
Where: Chatterjee & Lal 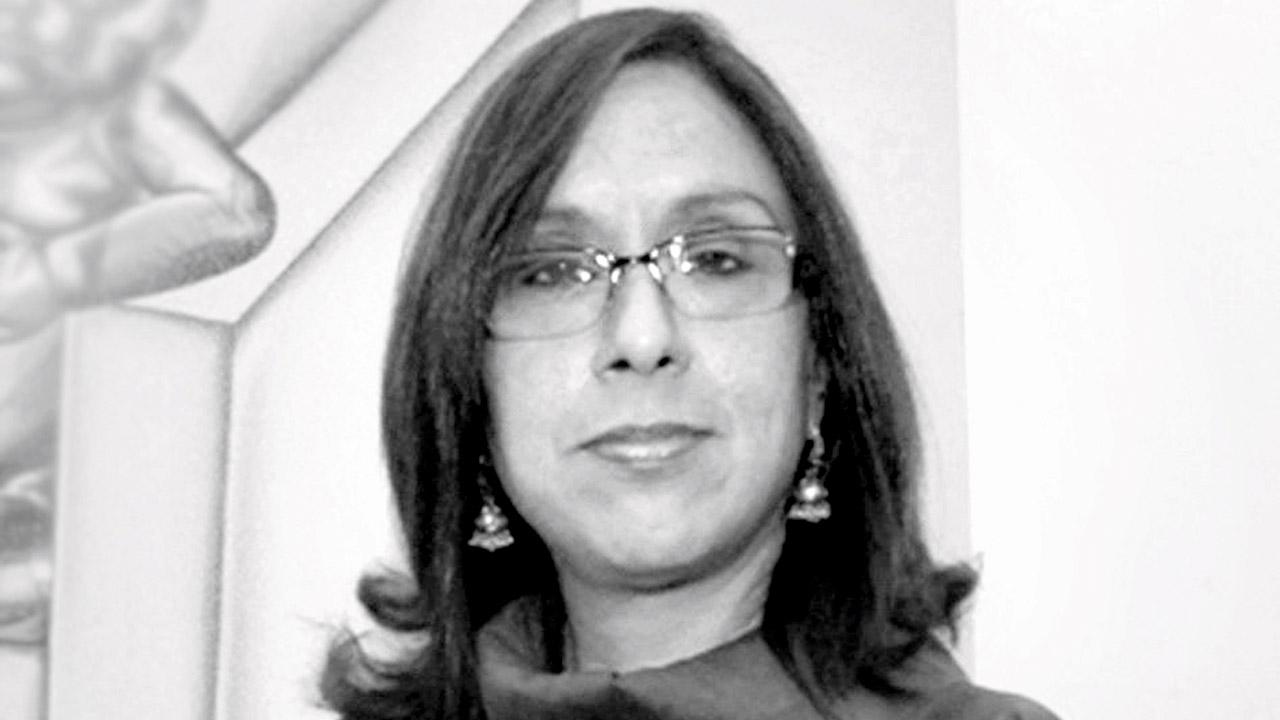 The exhibition features three series of monochromatic minimal works, exploring tendencies and potentialities of the square. A conscious effort to reduce the pictorial meaning to its bare essence is crucial to the New Delhi based artist’s work. Gallerist Anupa Mehta says, “The show is an exploration of geometric spaces drawn largely from the landscape and architecture of her city. Her keen observations of the metropolis are translated into an eloquent schematic of lines and markers. Initiated as symmetrical arrangements, Chetnaa’s work reveals the need to deconstruct the order she once sought, to build a new geometric logic that feeds her minimalist aesthetic.”
>>>
Where: Anupa Mehta Arts

Next Story : Love is in the air