India's first crowdfunded film was made with Rs 2 contributions?

Shyam Benegal's Manthan was India's first crowdfunded film, made with '2 contributions from half a million farmers. In a masterclass today, he tells you how he did it 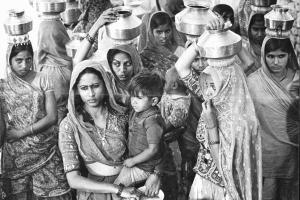 "There was no money to fund it or produce it," says Benegal. "Dr Verghese Kurien, who was the chairman, knew me well because I had made advertising films on Amul's products. A producers' co-operative had never been done anywhere in the world. These were small farmers, with one or two animals, who had come together for Dr Kurien's massive organisation, and turned us into the largest milk-producing country in the world. The formation of such a co-operative was a story that needed to be told."

Dr Kurien, a practical man above all else, asked him at the time, "How will you get the money to make it?" To which, Benegal replied, "We'll go with a begging bowl to all the farmers and say, 'This is your story. You give us '2 each.' They already had a system in which they would collect milk from farmers, morning and evening, 365 days of the year. There was a communication system already set up. So, it became easy for Dr Kurien to send a message: 'Every day we will give you '2 less. Because we want to tell the story — your story — on film.' That's how it was financed."

The title card of Manthan reads: '500,000 farmers of Gujarat present.' "Because it's their film. When the film was released, they and their families, which included a few million people, went to see the film. In Gujarat, the film not only covered its costs but made a profit within the first two weeks. And the profit went back to the farmers. So, it's a very interesting story."

What: The Story of Manthan: A Masterclass with Shyam Benegal
Where: The Habitat, 1st Floor, Hotel Unicontinental, 3rd Rd, Khar West
When: January 6, 3.30 PM
Entry: Rs 300
To book: www.insider.in

Next Story : Walk through galleries