In the later years, when Sairee Chahal worked in the corporate space, she witnessed sexism that women were being subjected to 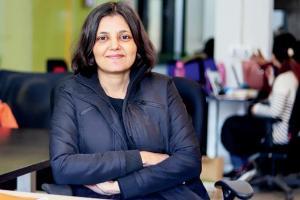 
Sairee Chahal
Delhi
Launched an app that has become one of the largest women-only social community platforms in South Asia
If Sairee Chahal had followed the path she had planned for herself, she'd have been an academician. A student of JNU with a Masters in Russian linguistics and an MPhil in international relations, her life mostly revolved around the campus, until she stumbled upon the Internet. "I met this person who wanted me to build a media product company [for the web] from scratch," she recalls. This was in the late 90s, when the possibilities of the World Wide Web were fairly unknown.

In the later years, when she worked in the corporate space, Chahal witnessed sexism that women were being subjected to. Also, having grown up in a middle-class family in the small town of Muzaffarpur, she felt that the "narrative of women" had been conveniently sidelined. It's then, for the first time, that she decided to use the Internet as a platform to make the office environment more accommodating and inclusive for women. "I always wanted to build something for women, which wasn't selling shoes or clothes to them," she says. She began in 2011 with the launch of Fleximoms, a solutions provider for women - especially mothers - wanting to enter and re-enter the workplace.

In 2014, she started SHEROES, which began as an online jobs and careers community, and in January this year, transformed into a women-only multi-lingual social community app, which in the short span of 12 months, has earned 14 million subscribers from as far as Pakistan, Bangladesh, and in Chahal's words, every "possible taluka in India". "It's the only place on the Internet where we have a gender-verified log in. We are women-only in a staunch way," says the Delhi-based entrepreneur.

"It's a safe, high-empathy, high-trust environment, where women can pursue whatever they want, whether it is to connect with peers, to share their creativity or just hang out," she adds. SHEROES currently boasts of nearly 65 communities, ranging from careers, relationships, art and craft, health, cooking, bazaar and mums of kids with disabilities. Earlier this month, they also participated in an edit-a-thon along with Feminism in India (an intersectional feminist platform), where SHEROES' Aspiring Writers' community where they helped build the Wikipedia profiles of Indian women cricketers on whom there had been very scanty information. "This is a reflection of how undervalued women in sports are. This exercise was interesting because regular women from across the country pitched in to make Wikipedia entries for our cricketers." By the end of the "wikithon," a total of 22 articles were edited and around 9,840 additional words added.

If there have been brickbats, it has come mostly from the men, who she says, are perplexed as to why women need such a platform. "They ask me, 'how could you?' They feel that they should be included in this too. But you know, a lot of women are wary of the online platforms that exist, because of the abuse and trolls. To me, the rest of the Internet is like a public garden. SHEROES is like a private beach, where women can be themselves, and enjoy a sense of freedom." Every day, someone writes to her, telling how liberating the experience of being on such a platform is. "Here, they don't get judged for being a woman... for being themselves."

Next Story : 'I could afford to take this burden on myself and I am glad I did'