Sania Mirza: I played at 2 am, days before I gave birth

An infectiously happy Sania Mirza takes time out from early morning training in humid Mumbai which by the way, she loves because it makes her sweat to discuss juggling a backbreaking but fulfilling double duty 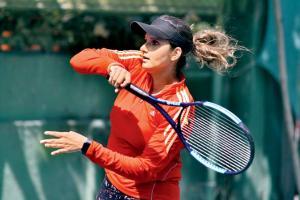 
It's a particularly sunny day after Diwali, and Juhu Vile Parle Gymkhana is busy with visitors. Members are quietly swarming at a distance from the tennis court, where Sania Mirza is playing with her hitting partner and childhood friend Rohan Gajjar. After days of unforeseen rain, which threw her visit to train off gear, she's now sprinting across the court, getting an hour of morning practice in. Exactly a year ago, she delivered Izhaan. But, her court coverage is still enviable, as she hits the trickiest of shots, and, overall, looks infectiously happy.

While Gajjar dashes close to the net and ends up missing a carefully aimed dry volley shot, Imran Mirza saunters in and warmly introduces himself as Sania's father. Through the course of her play, he comments on her unique style of serve and how it has required tweaking to avoid injuries.

Soon, soaked from head to toe, Mirza is done with practice. "I love playing in this weather," she says unexpectedly, "because Mumbai's humidity makes me sweat, which is excellent training for big tournaments. I make my body adapt to different conditions, so I prefer to shuffle between Mumbai, Hyderabad and Dubai."

We think she is going to next speak of the challenge of finding her mojo after motherhood, but Mirza smiles, "It's been a lot of fun! I started physical work three weeks after giving birth to lose the weight, and began training three months after. Over the last two months, I've begun playing rigorous tennis six days a week." She admits that the start was dodgy because the body doesn't "feel" the same after giving birth, but she puts the biggest difference not to motherhood but age. "My body doesn't recover the way it used to. It's been two years since I played competitive tennis, so I am two years older, and in tennis, that's a long time."

While she never spoke about returning to tennis while she was pregnant, sports fans wondered if she would. As a former world number one in tennis doubles, with six Grand Slam doubles titles to her name, we didn't expect Mirza to go away anytime soon. "This wasn't always the plan, although I was asked the question all the time. The reason I never committed to coming back to tennis was because I didn't know how my body would react. It takes a tremendous toll [on the body and mind] when you are a professional athlete. It's the same when you take care of an infant. Both are physically and emotionally demanding. And then, there is time management." Her "team" has been helpful, she jokes. It's made up of her parents, Naseema and Imran, and a pair of nurses. For his part, Izhaan, who is being pushed in a pram on the adjacent court, seems at home.

Over the last year, Mirza has lost 26 kilos and documented the fitness journey for her 5.8 million Instagram followers. "I'm in a privileged position. Women look up to me. I wish to be a positive influence. I get messages from them about not hitting the gym post pregnancy and that my posts motivate them to exercise. It's what inspires me to train more. At the end of the day, as women, we relate to each other." 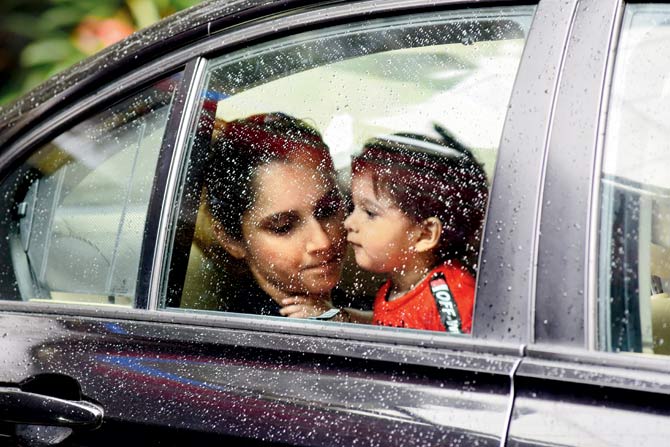 While she stayed active throughout the pregnancy, she shares a bizarre anecdote of playing tennis two nights before she delivered. "I was almost 40 weeks pregnant and there was no sign of this baby coming out! I was very uncomfortable and getting odd aches and pains. So, at 2 am, I felt this desperate urge to play!"

Now, every day starts with a couple of hours of training. Gym sessions are usually scheduled around Izhaan's nap time. Being in a single player sport can get monotonous, she says, " [all we do is think] about the forehand and backhand. We get obsessive, selfish. It's important to be around family, and in touch with reality."

In 2020, she will begin playing at the start of the season in Australia, competing at Hobart and Brisbane International before entering the Australian Open in Melbourne end of January. While still in talks to choose a partner, she plans to play doubles and mixed doubles.

But for now, she'll play mother. Cooling off post play, she scoops up Izhaan while waiting to head back to the hotel. "Sport is a very big part of my family's life. Izhaan already likes it, but it's becoming difficult to keep him away from technology and screens. He's barely one, and I'm already strict about screen time!"