Fed up of family's goats, neighbours burn their 7-yr-old son to death 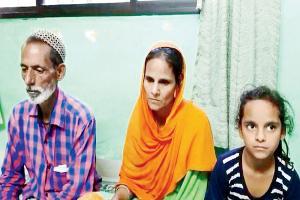 
A long-simmering quarrel between neighbours over a few goats in Nalasopara ended with the murder of the goat-owner's seven-year-old son. The neighbours had poured petrol over the child and set him alight in his house compound a month ago. He had sustained 50 percent burns and succumbed to his injuries at Kasturba Hospital last week.

The Tulinj police have arrested Alok Shrivastava and Akash Shrivastava on charges of murdering Faizan Quereshi.

According to police sources, all involved live in Santosh Bhavan Gorai Pada. Faizan lived with his father Izhar, mother Samuza and two elder sisters, and was studying in Std II. Izhar reared goats for a living.

Alok runs a business while Akash is jobless and the two are close friends. The two used to be constantly annoyed by the goats roaming in the area and leaving droppings everywhere. They often quarrelled with Izhar over this. The day before Alok burnt Faizan, he had threatened to burn the entire family. The next day, when Izhar was out fetching fodder for the goats, Alok and Akash arrived at the Qureshis' house, poured petrol on Faizan, and set him alight.

Faizan's shocked mother rushed him to hospital after dousing the fire. Based on Faizan's statement, the Tulinj police registered a case against the two accused. 'We initially arrested the accused under section 307 (attempt to murder) and 34 of the IPC. After the boy's death, we have attached section 302 (murder) of the IP to the charges," said investigating officer API K Sanap from Tulinj police station.