Sea wall along coastal road could lead to more floods in Mumbai: Experts

While Sunday marked the completion of 10 years since 26/7, it has now come to light that two of BMC’s most ambitious plans Development Plan (DP) and coastal road will not do anything to prevent flooding 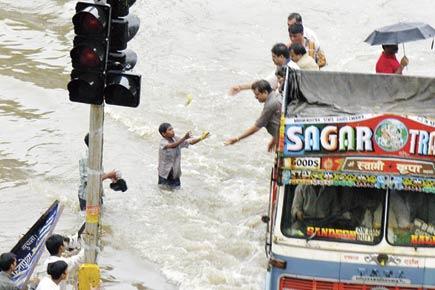 If there is one thing the Brihanmumbai Municipal Corporation (BMC) has consistently shown when it comes to providing civic amenities and infrastructure congruous with the environment, it is that it never learns to do so. 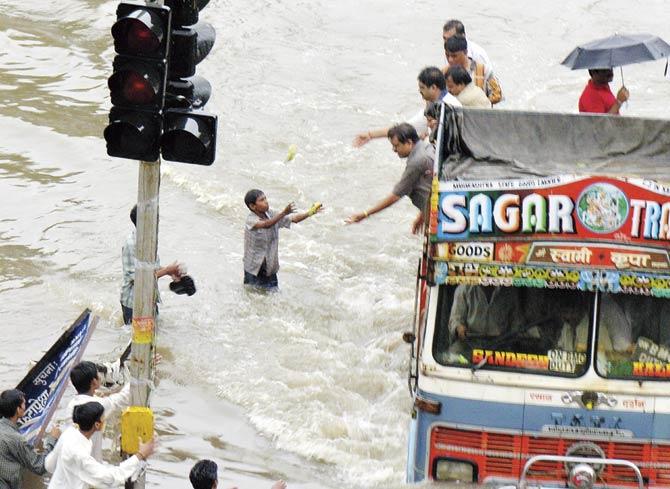 LBS Marg during the floods in 2005. The sea wall might lead to flooding as the retaining walls of some rivers did. File pic

While Sunday marked the completion of 10 years since the 26/7 Mumbai floods, it has now come to light that two of the BMC’s most ambitious plans Development Plan (DP) and coastal road will not do anything to prevent flooding in the city.

While the DP makes no specific provisions to arrest flooding, a sea wall to be constructed for the coastal road may actually cause more flooding, since it will stop channels of water entering the sea.

Wall of problems
Well-known architect P K Das has criticised the DP as well as the coastal road in public forums. He said, “A sea wall has been envisaged along parts of the coastal road. But construction of such walls is banned in the US and Europe.

Officials’ assumption that it will prevent storm surges is archaic. It will in fact lead to flooding, since the wall will prevent floodwater entering the sea. If a natural drainage channel underground is severed, it will result in a counter action and cause flooding in the city.”

Environmentalist Rishi Agarwal also said that it was possible that the sea wall might lead to what retaining walls along some of Mumbai’s rivers led to. “Retaining walls were built for Dahisar, Poisar, Mithi rivers, which actually caused rain water to head towards the land. So I am unsure of the impact of the sea wall on flooding.”

Road to troubles
Hussain Indorewala, assistant professor at Kamla Raheja Vidyanidhi Institute for Architecture, who has been studying the coastal road project, said, “The 2005 floods were mainly caused because of the intensity of rain, which was 125 mm/hour while our drainage systems are equipped to handle only 25 mm/hour.

The recent June 19 rains had an intensity of only 38 mm/hour and, even then, there was flooding. This means 26/7 may happen again. Besides, the coastal road will destroy mangroves which act as a natural absorption channel for flood water, on a large scale.”

According to Indorewala, the coastal road will further reduce the width of the Juhu nullah and Malad creek. “Mangroves near the Malad creek will be destroyed for the road to be constructed there. This means all areas adjacent to the Malad creek (upstream) will be flooded during monsoons,” he said.

The coastal road’s environment impact assessment report states that mangroves should not be destroyed. Raghavanand Haridas, an architect from Santacruz, also criticised the coastal road for its tremendous costs to the public exchequer. “In the erstwhile development plans, a ring road was proposed between Bandra and Borivli.

Why can’t that concept be developed? Why do we need the coastal road at all?” Today (July 27) is the last date for submitting suggestions and objections for the coastal road. The civic body has received around 60 of them so far. The draft development plan released by the civic body in February, also makes no separate provisions to prevent flooding.

Only broad outline
“We have made provisions for additional pumping stations in the DP. Besides, the Development Control Regulations (DCR) stipulate certain things such as distance of a building from a nullah and plinth height. But no other provision was made.

After all, the DP only gives a broad outline for the city. The specific departments should deliberate on this,” said V K Phatak, consultant to the BMC for the original draft DP. The DP is now being revised and suggestions/ objections are supposed to be incorporated.

Next Story : How has the film industry made a fool like Salman Khan their icon: BJP