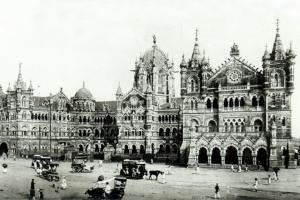 
The first train in Asia (and India) ran between Bombay to Thana on Saturday, April 16, 1853, at 3:35 pm. The day was declared a public holiday.  Bori Bunder, the point of departure was thronged by a multitude, and bands played and guns were fired from the Fort's ramparts, when at the signaled moment, there steamed out from a tiny wooden station, the little train hauled by three engines that heralded the dawn of the Railway Era in India.

As the years passed, the Great Indian Peninsula Railway expanded.  With the merger of the Indian Midland Railway Company with the G.I.P. Railway Company in 1900, its frontiers were extended from Delhi in the North, Kanpur, and Allahabad in the North-east and Nagpur in the East to Raichur in the South-east.  Thus, a connection from Bombay was obtained to almost all parts of India.  The route mileage of the G.I.P. Railway was 1,600. (2575 km)

On November 5, 1951, Central Railway was formed by integrating Nizam State, Scindia State, and Dholpur State Railways, with GIP Railway. Central Railway suburban railway network has played a pioneering role in the socio-economic growth of the city of Mumbai and also heralded the advent of the mass rapid transit systems in India. Central Railway has come a long way since then and now it has a vast network of 4151.93. route kms traversing through the states of Maharashtra, Madhya Pradesh, and Karnataka. Mumbai Suburban Network of Central Railway is one of the largest networks in the world carrying approx. 4.2 million passengers every day.  The Statistics of CR over the 68 years is given below:

Sanjeev Mittal, General Manager, Central Railway said, "Central Railway, in its 68 Glorious Years has added many chapters in the history of Indian  Railways. From its first run in 1853 to its integration in 1951 and to date Central Railway - the first and foremost railway in the Asian Sub-continent has played an important role in the social & economic development of the country. It is our endeavour to provide safety & security to the esteemed passengers of Central Railway. Our focus is to stick to punctuality and we are committed to Infrastructure Development for Better Passenger Amenities."

The Central Railway Headquarters, the UNESCO awarded World Heritage Building, the Chhatrapati Shivaji Maharaj Terminus was recently awarded the best swachh iconic place in India as recently adjudged by Ministry of Jal Shakti, Ministry of Drinking Water and Sanitation. The Juries from the Guardian Ministry of Drinking Water & Sanitation, JAL Shakti. Swachh Iconic Places in collaboration with three other central Ministries: (i) Ministry of Housing and Urban Affairs, (ii) M/o Culture, and (iii) M/o Tourism and (iv) UNESCO.  CSMT competed for this Best Swachh Iconic Place in India with 30 other places as selected in all three phases. The Chhatrapati Shivaji Maharaj Terminus Heritage building which is illuminated with LED lights with RGB technology wears different colours on a special occasion is a real sore to eyes and a treat to watch after having donned the cap of the most photographed building in India after Taj Mahal.

Central Railway has taken stringent measures in its security front. It has inducted more than 500 Maharashtra Security Board Personnel for the suburban section of Mumbai alone to keep around the clock watch ensuring the safety & security of the passengers. Mumbai Division. Railway Protection Force always plays a vital role in sensitizing the passengers through various awareness programs about All India Helpline No. 182 and also launched a successful awareness program "My Left is My Right" for seamless movement of passengers, to maintain the lane discipline of “ Keep Left” and travel safely. This program was able to reach more than 2 million commuters.

The Central Railway, through its Railway Protection Force from time to time, engages itself in various operations to protect passengers, safeguard railway property and combat crime. RPF launched 'Operation Thunder' and 'Operation Dhanush' to curb the menace of touting of Railway reservation tickets. These operations are the dedicated effort by the Central Railway RPF in its relentless pursuit of putting an end to ticket black-marketing.

Central Railway also launched a Special Drive with a Code Name - Operation 'Number Plate' to identify and verify all vehicles parked in Railway premises, circulating area, parking's and even in the 'No Parking' areas for a longer duration. A large number of unidentified vehicles considered as a serious threat to security and safety of passengers were found, fines levied and cases registered.

Central Railway recently launched the quickest suburban ticket booking in just 5 seconds through its - One Touch ATVM". A total of 92 One-touch ATVMs were installed at 42 suburban stations to facilitate fast ticketing to its millions of commuters over the Mumbai Suburban Network.

Central Railway is committed towards Digital India and has enabled 100 percent digital transactions, free Wi-fi facility at all its railway stations. It has also started IP based indicators at various stations in order to create a clean and green environment. It is in advance stage of Bio-Toilets fitment in all trains of Central Railway. As a part of Green initiative, Solar and wind panels were installed at various locations harnessing 7719 KWP and created Asangaon station as a first green station on Central Railway.

The Fourth Suburban Corridor of Mumbai was opened between Nerul/Belapur and Kharkopar stations and Central Railway introduced 40 suburban services in that section for the benefit of passengers.

A new suburban terminus at Parel was commissioned for the benefit of a large number of passengers from corporate business centres and commercial hubs and patients getting treated at Renowned hospitals like Tata Memorial Cancer Hospital, K.E.M. Hospital, B.J. Wadia Hospital for Children and N. Wadia Maternity Hospital, etc. The 32 services were introduced to/from Parel terminus thus helped in decongestion and quicker dispersal of passengers.

The first Rajdhani Express over Central Railway was flagged off on January 19, 2019. This Bi-weekly express was increased to four days a week from September 13, 2019. The introduction of Push-Pull Technology for Mumbai-Hazrat Nizamuddin AC Rajdhani Express has cut down the journey time by 1 hour 40 minutes. This is a revolutionary step in the enhancement of speed and saving of time. It is yet another milestone achieved by Central Railway in its continuous efforts to provide better service to its passengers.