Operation Theatre at the PGH

What would you make of “Manchu Macbeth” and “Hamlet no Omelette” 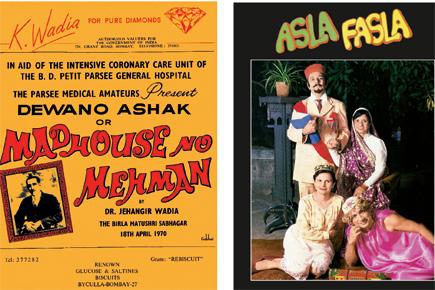 What would you make of “Manchu Macbeth” and “Hamlet no Omelette”?

Shakespeare with a delicious twist, yes. But dramatically different too was the fact that these Gujarati spoofs were stirred up in Parsi General Hospital before regaling cosmopolitan audiences every Navroze night on March 21.

The remarkable theatre-for-charity tradition was introduced by Dr Jehangir Ratanshah Wadia in 1917. It roped in a versatile bunch of Parsi physicians and surgeons, doubling as actors and directors to present a truly unique brand of theatre. Cheeky parodies and imaginative comedies though they were, merriment met sobriety.

Packing in full houses, they netted handsome funds for philanthropy. Among the hilarious gems flowing from the good doctor’s pen were Bewafa Bairu, Pastailo Parsi, Ghotala ma Gos and Parsi Harishchandra. He designed their beautiful sets and costumes as well. 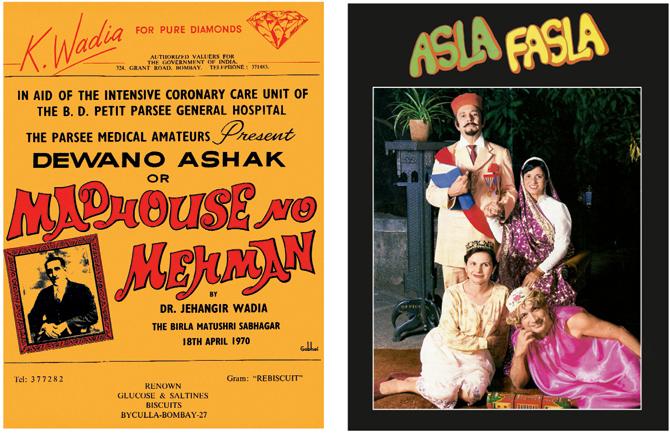 Posters of Madhouse no Mehman and Asla Fasla

Sad irony had it that altruistic Dr Wadia passed away as a pauper. Inspired by him, large-hearted city audiences raised R80 lakh between 1970 and 1991, then a princely sum.

It was used for Parsi and non-Parsi beneficiaries alike. After their smash hit Madhouse no Mehmaan, the Parsi Medical Amateurs (PMA) charged R100 a ticket, contributing to cancer research, convalescent homes and free dispensaries.

Adroit adaptations mocked epic tales and classic tragedies were tweaked to hysterical farces. Going from legend to lunacy, romances like Romeo and Juliet simply switched the Capulets and Montagues to feuding families called the Kakalias and Bhagarias.

To catch up with these medicine men and women is to rewind to evenings of happy histrionics. They look back with delight at their stage innings of ribald revelry. “Ghani majaa karteta — we had such fun!” remembers radiologist Jimmy Sidhva, big daddy of the second wave of doctor naataks. Travelling to Pune and Baroda, the plays reached as far as Karachi. Homeopath Dilnavaz Gamadia recalls a rave reception extended to Madhouse no Mehmaan when it crossed the border.

Premier performances were for members of the Parsi Medical Social Gathering (a group from Grant Medical College), followed by a gala dinner in Parsi General Hospital at Kemps Corner. At least three more shows of each play continued in public halls like Patkar, Birla and Sophia Bhabha on weekends after opening night.

The flurry of production was centred at Parsi General Hospital. Rehearsals were held in the space behind its main offices. Hospital superintendents organised food for the “actors”, served by ward boys. Other logistics were as meticulously worked out.

Amused hospital telephone operators got used to speedily relaying news of rehearsal timing changes. In an ultimately quaint routine, ambulances ferried sets, props and costumes for trial fittings across town to the doctor’s clinics. This entertainment became a rage with people of every Gujarati-speaking community. MF Husain was in for his own surprise.

He heard of the PMA when he visited Dr Sidhva for an X-ray and confessed to loving Gujarati plays thanks to growing up on Grant Road. So he was invited to a show. Expecting the painter to be barefoot as usual, Sidhva brandished a pair of slippers onstage. Stunned to see the artist actually shoe-shod, he quickly quipped: “See here, that’s because I’m wearing Husain’s chappals.”

It’s been two decades since the last outrageous revue in the 1990s: Doctors on Parade directed by Sam Kerawalla and Doctors Unplugged conceived by surgeon Bomi Pardiwalla. Three generations of audiences are left with sparkling memories... of radiologists who enjoyed tickling ribs besides x-raying them. Of anaesthetists who dispensed laughing gas in large doses. And of orthopaedic surgeons whose favourite piece of anatomy would have to be the funny bone.

Next Story : Bihar: Over 900 held in anti-cheating operation in matriculation exam