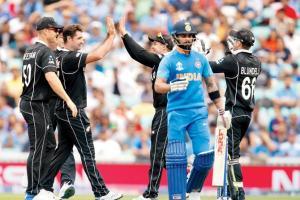 
Having got past two of the strongest teams in this World Cup, India are up against another gritty outfit in New Zealand at Trent Bridge in a couple of days’ time. Despite having won comprehensively against South Africa and Australia, the Indians will be wary of their next opponents as they are the only side India have lost to, albeit in a warm-up game.

Of course, neither the Kiwis nor the Indians think that the result in the warm-up game at The Oval on May 25, is going to have an impact on their clash tomorrow. But one thing is certain, if the weather conditions on the match day are conducive to swing bowling, then India will surely have a tough battle on their hands, especially if the Kiwis get a chance to bowl first.

However, New Zealand coach Gary Stead was the first to admit that it would be naive to consider that a warm-up game result will make any difference when the teams line-up at Trent Bridge.
“The result [of the warm-up game] has no bearing on the World Cup [game],” said Stead. “It was just nice we got some confidence going before the main event, but we let that go pretty quickly... when we play India at Trent Bridge in a couple of days’ time, whatever happened at The Oval doesn’t really matter.”
However, he had a word of caution for India, saying “Every team in the tournament are capable of beating anyone else. We have to be near our best, but if they take us lightly and we have a great day, there is no reason why we can’t win. I expect every team will get beaten at some stage, and I hope we have the capabilities to tip up the Australians and the Indians, and I’m sure we can.”

The Kiwi coach did not want to look too far ahead at this moment, saying “I’m confident of our side. They’re playing well and I’m impressed with how they’re taking it one game at a time.”

The Kiwis have had quite a quirky schedule as their first three opponents have been Asian sides, a comparatively easy schedule, and they have easily got rid of Sri Lanka, Bangladesh and Afghanistan. But Stead is not one to be led into a false sense of confidence as in those games, barring a bit against Bangladesh, the team were not tested as much as he would have liked.

“Those three games were ones that were potential banana skins. We played all three, we weren’t affected by weather and it’s nice to be sitting atop the table.
“We felt Sri Lanka, Bangladesh and Afghanistan weren’t the best teams in terms of setting targets, and all the numbers in English conditions led us to bowl first.

Despite bowling first and making short work of all the three Asian opponents, Stead said the team still fancies batting first rather than chasing down targets.

“But if we had to bat first, it is probably the preferred method of ours. When you look back over the last three or four years, chasing has been more difficult and that has been the pleasing thing about the three games - we chased them all.

“The one against Bangladesh was tighter than it should have been, but pleasing to get over the line and be put under pressure. That was like a good preparation before we take on India, in case we have to chase a target rather than set one,” he said, exuding confidence.

Next Story : Injured Stoinis out of Pakistan clash, Marsh called as replacement