WhatsApp joke! How demonetisation has affected Aishwarya and Jaya Bachchan 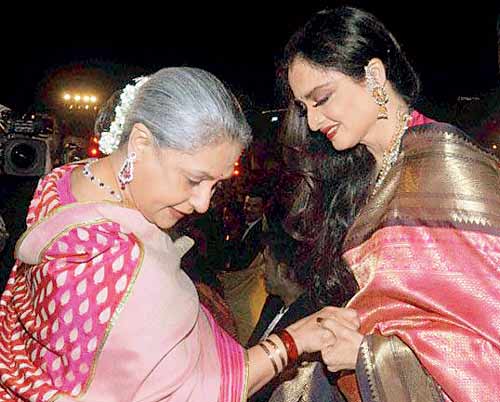 Jaya Bachchan and Rekha chat at the 2014 Screen Awards

Demonetisation has taken a toll on every Indian. And the repercussions are being felt by even the first family of Bollywood -- The Bachchans. Or that's what some people would want us to think.

A message that recently went viral on WhatsApp shows both Bachchan matriarch -- Jaya -- and her daughter-in-law Aishwarya Rai Bachchan wearing the same sari.

Now, instead of highlighting how these celebs are without air and behave like regular people, some mischievous minds decided to suggest that the two ladies were spotted wearing the same sari because the Bachchan family was feeling the after-effects of demonetisation.

After all, the message and pain of demonetisation's effects on people can be most powerfully presented by showing the most powerful family of Bollywood also being affected by it.

It is heartwarming to see mother-in-law and daughter-in-law share the same wardrobe and carry off the look with elan.

Interestingly, the images had initially gone viral in September 2016 with amused Twitterati commenting on the same.

But it has returned to do the rounds as a harassed citizenry look to lighten the mood to reduce the effects of the new policies being put in place.

Surname helped but feel like an outsider in Bollywood: Shruti Hassan