Amitabh Bachchan and Rishi Kapoor's 102 Not Out heads for China 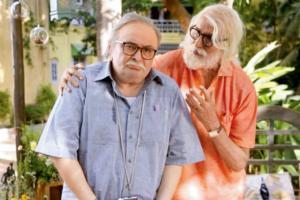 A still from the movie 102 Not Out


Amitabh Bachchan-Rishi Kapoor's 102 Not Out will release in China on November 30, marking Sony Pictures Entertainment India's foray into the China market. Based on a stage play by Saumya Joshi and directed by Umesh Shukla, 102 Not Out features Amitabh as a boisterous 102-year-old father to his conventional 76-year-old son played by Rishi. The film revolves around the father's aim of breaking the record for being the world's oldest person, a title held by a Chinese man.

"At Sony Pictures India, we are excited to foray into China market with '102 Not Out'," Vivek Krishnani, MD, Sony Pictures Entertainment India, said in a statement.

"Indian films with a strong emotional core have done extremely well in the region and have resonated with the audiences there. '102 Not Out' received much love from the audiences in India and across the world - and we are excited to now take this heartwarming tale of a father and son to the Chinese audiences," he added.

Produced by Sony Pictures Entertainment Films India, Treetop Entertainment and Shukla's Benchmark Pictures, the film released in India on May 4.