Ayushmann Khurrana on going bald: If there is a need, I will go for it 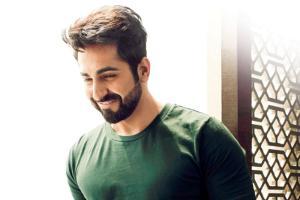 
Be it his blind pianist act in AndhaDhun or his quirky interpretation of a son grappling with news of his mother's pregnancy in Badhaai Ho, Ayushmann Khurrana emerged the star of the year gone by with his offbeat roles. Continuing with his love for unconventional roles, the actor will soon start prepping for Bala, a film that sees him play a prematurely balding man. Ahead of the Amar Kaushik-directed comedy going on floors in March, rumours have been rife that he will shave his head for the part.

Quiz him on it, and Khurrana says, "If there is a need [to go bald], I will go for it. Physical transformation is imperative for any character that you play on screen. On my part, there will be no hiccups."

The comedy marks his third collaboration with Bhumi Pednekar after Dum Laga Ke Haisha (2015) and Shubh Mangal Saavdhan (2017). If their last two outings challenged social norms, their latest venture too tackles society's perception of beauty with Pednekar playing a dusky girl to Khurrana's balding guy. He hints that the film will also see him pile on the kilos. "We have yet to zero down on the final look. We are figuring out what will go well with the character, including the weight of the person."

The actor was recently a part of an online chat show presented by Grey Goose, where Zoya Akhtar and he spoke about the changing face of content. Having backed content-driven films in his career so far, Khurrana reiterates that stories, not stars, will determine the fate of movies in 2019, too. "Stars are no longer stars, but content creators. You cannot be sure that a certain kind of film will work. Ultimately, it all boils down to entertainment."

Also read: Ayushmann Khurrana: I am audience made star