'Balasaheb Thackeray's glasses were given to us to replicate' 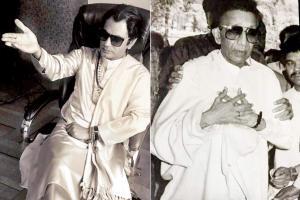 Siddiqui as Balasaheb Thackeray; one of the pictures used for reference


Nawazuddin Siddiqui had a tall order at hand when he stepped into the shoes of late Shiv Sena supremo Bal Thackeray for the Sanjay Raut-directed biopic, Thackeray. However, it won't be wrong to say that costume designer Santosh Gavde, along with the makeup artiste, made matters slightly easier for the actor — it is to the stylist's credit that Siddiqui bears a striking resemblance to the charismatic leader in the film. Gavde tells mid-day that the Thackeray family shared rare pictures of the patriarch that he used as references.

"The family and Raut sir helped us source rare pictures and videos of him from the '60s and '70s. The original glasses and glares that Balasaheb used were made available to us, to replicate. In fact, we tapped into Balasaheb's personal collection, so we knew exactly what we had to recreate. Most of Nawaz sir's outfits were stitched [after studying Thackeray's wardrobe]," says Gavde, adding, "We knew that the family has entrusted us with a big job, and we couldn't afford to go wrong."

Siddiqui's look recreated on the basis of the archived picture

Since the biopic spans almost four decades of Thackeray's life, Gavde says it was tough to crack the different looks over the eras. "The film begins with his rise to power. So, we had to go back to the '60s and '70s and build his character from scratch. It was a four-month-long process as we studied his pictures, videos from the era, and his biographical material. We went back to as early as 1957 archives to get the looks. The '80s and '90s looks were relatively easier to nail since we had more reference material at hand."

Gavde — who has previously worked on Marathi films including Ubuntu (2017) — says Siddiqui's understanding of the character enhanced the narrative. "He made relevant suggestions that made our job easier. He looks the part to the T."