Radio City, India's leading radio network has initiated Concert From Home, a one of its kind concert by singers, music composers to entertain listeners nationwide, who are working from home amidst this lockdown phase. 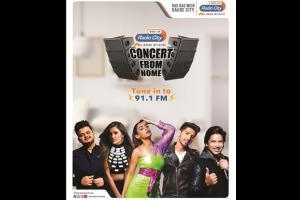 
COVID-19 has gripped the world and is spreading panic and havoc amongst the citizens worldwide. To control its impact on India, our Prime Minister has advised a 21-day lockdown, wherein the citizens are advised to stay indoors. To battle this boredom of staying at home, Radio City, India's leading radio network has initiated Concert From Home, a one of its kind concert by singers, music composers to entertain listeners nationwide, who are working from home amidst this lockdown phase.

As a part of Radio City's Concert From Home, Radio City RJ's connect with the singers, music composers, who perform a concert from their homes exclusively for Radio City listeners. In Mumbai, Radio City's RJ Salil and RJ Archana of Kasa Kai Mumbai, have been airing the performances by talented singers like Armaan Malik, Vishal Mishra, Shweta Pandit, Shaan, Shibani Kashyup, Siddharth Mahadevan, Sachet Tandon, Shalmali Kholgade, Aastha Gill and many more. The concert by these singers is amplified across all the shows by the RJ's to entertain Mumbaikars. To enthrall, Delhiites, Radio City Delhi's RJ Yuvi, is adding a Punjabi tadka with performers like Gurnazar, Akhil, Akhil Sachdeva, Sunanda Sharma, Milland Gabba, Prabh Gill and many more.

Radio City advises all its listeners to stay indoors, stay safe, and stay healthy and tune to Radio City to enjoy Concert From Home, at their homes, where their favorite singers and performers are all set to rule their hearts!

Music Broadcast Limited currently has 39 stations across 12 states, comprising 62% of the country's FM population. Radio City reaches out to over 69 million listeners in 34 cities covered by AZ Research 2019 (Source: AZ Research Report). The network provides terrestrial programming along with 18 other web-stations, through its digital interface, www.radiocity.in.

Radio City has spearheaded the evolution of FM radio by offering content that is unique, path-breaking and invokes city passion amongst listeners with its brand philosophy of “Rag Rag Mein Daude City”. The network introduced humour and the concept of agony aunt on radio with Babber Sher and Love Guru respectively. It also initiated Radio City Freedom Awards, a platform to recognize independent music and provided a launch pad to budding singers with Radio City Super Singer, the first singing talent hunt on radio.

Radio City bagged 73 awards across national and international platforms like Golden Mikes, India Radio Forum, New York awards, ACEF awards etc. in 2018-2019. Radio City has consistently featured for the 7th time in 'India's Best Companies to Work For' study conducted by Great Place to Work Institute. In 2019, Radio City ranked 6th in 'Best Large Workplaces in Asia', according to the GPTW survey. Radio City has also been recognized in 'India's Best Workplaces for Women – 2019' and has ranked amongst the Top 75 organizations on the list.

This story has been sourced from a third party syndicated feed, agencies. Mid-day accepts no responsibility or liability for its dependability, trustworthiness, reliability and data of the text. Mid-day management/mid-day.com reserves the sole right to alter, delete or remove(without notice) the content in its absolute discretion for any reason whatsoever

Next Story : Sharad Kelkar on people roaming out amid COVID-19: Are we stupid?