Dia Mirza: After placing mole on my face, I saw Maanayata 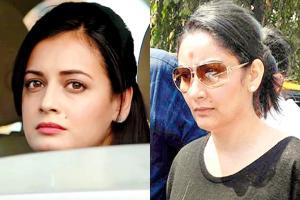 Dia Mirza in a still from Sanju and Maanayata Dutt


Having shared screen space with Sanjay Dutt in multiple films in the late 2000s, Dia Mirza had barely imagined that years later, she would play his on-screen wife in his biopic, Sanju. The actor reveals that after Rajkumar Hirani approached her, she had to go through elaborate look tests before she could picture herself as Maanayata. "I had to colour my hair jet black; I had never done that as my hair is naturally brown. But when I placed that mole on my face and saw myself in the mirror, I could see Maanayata in the reflection."

Although she has met her on-screen muse on several occasions, Mirza largely went by Hirani and writer Abhijat Joshi's vision to get the emotional nuances of the role. "Raju sir told me to follow the rhythm. Maanayata came into Sanju sir's life when there was so much going on. From the court hearings to his jail sentence — she has seen it all." That Mirza has deep admiration for Hirani is evident as she says that their equation goes beyond films.

"Raju sir says that as soon as he wakes up, he remembers me. Is he using an eco-friendly toothbrush, is he saving water are the first thoughts [that cross his mind]." Mirza heaps praise on co-actor Ranbir Kapoor too, who "does an enormous amount of homework, but does not philosophise about it."

Next Story : Huma Qureshi: Sexual harassment at work place not being managed well in India