Dia Mirza and husband Sahil Sangha shared a statement on Twitter confirming the news of their separation and said that she and Sahil will continue being friends and will be there for each other. 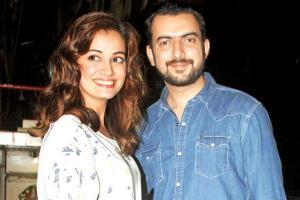 An old photo of Dia Mirza and Sahil Sangha


Fans of Dia Mirza are shocked and surprised to know that the actress has announced her separation from husband Sahil Sangha after being together for 11 years. Dia Mirza shared a statement on Twitter confirming the news and said that she and Sahil will continue being friends and will be there for each other.

Dia Mirza, 37, and Sahil Sangha, 39, were in a relationship for a while before they got married in 2014. "After 11 years of sharing our lives and being together, we have mutually decided to separate. We remain friends and will continue to be there for each other with love and respect. While our journeys may lead us down different paths, we are forever grateful for the bond that we share with each other," the statement read.

Dia, known for her roles in Rehna Hai Tere Dil Mein, Dum and Sanju, co-owns a production house with Sangha, and the duo has produced films like Love Breakups Zindagi and Bobby Jasoos.

The statement further read, "We thank our family and our friends for all their love and understanding and members of the media for their continued support and request everyone to respect our need for privacy at this time. We will not be commenting any further on this matter."

Dia's Twitter followers and well-wishers responded to the news with comments like "everything happens for a reason...good luck for future...", while another Twitter user wrote, "It is never an easy decision to separate but now that you have taken it I wish you all the best mam for your future."

Next Story : Vicky Kaushal elated to spend time with Army at Indo-China border