Harshdeep Kaur: All the musicians readily agreed to be part of it

Roping in an array of top musicians for a tribute track to mark Guru Nanak's 550th birth anniversary, Harshdeep Kaur discusses how she played to their strengths 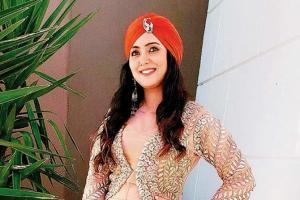 
In a first of its kind collaboration, several industry artistes including Shankar Mahadevan, Kapil Sharma, Salim Merchant, Shekhar Ravjiani, Shaan, Neeti Mohan and Jaspinder Narula, among others, have joined hands with Harshdeep Kaur for a tribute track to mark Guru Nanak’s 550th birth anniversary. Kaur, who composed a Shabad for the number, tells mid-day, "It is a worship song called Satguru Nanak aaye ne. It was easy to [create] this song; it seemed like the universe was helping me make it. All the musicians readily agreed to be part of it. My aim was to compose something celebratory."

Penned by Charanjit Singh and Jagmeet Bal, with the latter also taking on duties as director of the music video, the track, Kaur says, employed familiar voices so that they could reach a wider audience. "We also wanted diverse personalities to be part of this melody. I added aalaaps, adlibs and harmonies, so that each artiste could showcase their strengths."

Even though Kaur continues to make her mark in commercial cinema, she was drawn to Sufi music early on. "I gravitated towards Sufi music because I have been a fan of Nusrat Fateh Ali Khan saab and Abida Parveen ji. Sufi music is soulful, and connects one to the almighty. But, I am a singer and strive to be better each day. Music cuts across language and geographical barriers," she says of her affection for Bollywood music.

Juggling different genres, says Kaur, enables her to comprehend her weaknesses, and then address them. "If I only play to my strengths, that wouldn’t be exciting. I work on my weaknesses as well, and know that there is room for improvement. Juggling genres helps me ensure that I’m aware of what I must work on."