Kalki Koechlin shared a sweet video with daughter Sappho, where the actress is seen singing a lullaby while playing the Ukulele. 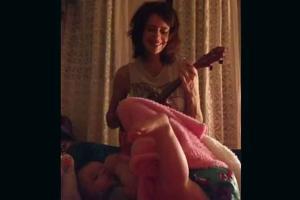 
Kalki Koechlin, who gave birth to a beautiful daughter Sappho, has been spending lockdown time with boyfriend Guy Hershberg and baby girl. The actress has been keeping up her daughter occupied with singing. Recently, Kalki sang a lullaby for her daughter Sappho in Tamil. She says she adapted the original to accommodate her lack of musical experience.

Kalki sang the lullaby for Sappho with the help of her ukulele, to put her daughter in sleep mode. She shared the video on her verified Instagram account. Check out the video right away!

Kalki's friend and actress Sayani Gupta commented: "She's growing soooo big. When will I see her." Filmmaker Anurag Kashyap's daughter Aaliyah Kashyap said: "This is so soothing, I could fall asleep to it." Director Shonali Bose wrote: "Toooooooo beautiful mamma."

Kalki and her boyfriend Guy Hersberg welcomed Sappo in February 2020. She had previously married filmmaker Anurag Kashyap in 2011 but the two separated after a couple of years. On the work front, Kalki was last seen in the film "Gully Boy" starring Ranveer Singh and Alia Bhatt. The film is directed by Zoya Akhtar. She was also seen in the web-series "Bhram".

Baby Sappho was both on February 7. Kalki, who turned mother, even shared a long post thanking everyone for her wishes and positive energy. She also gave all the respect to all the women who go through the intense and gruesome experience of birth.

Next Story : Bhuj: The Pride Of India - Sonakshi Sinha's first look is out!