Kangana Ranaut said, "So, Sonam Kapoor has the license of trusting some women and some she won't?" 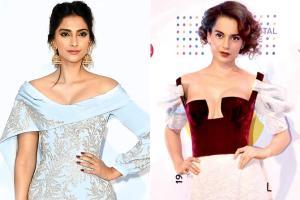 
Kangana Ranaut, who recently accused 'Queen' director Vikas Bahl of sexual misconduct, has lashed out at Sonam Kapoor Ahuja for 'judging' her 'Me Too' story. Sonam reportedly said that sometimes it is difficult to take Kangana seriously as she says many things. "I think Kangana wrote something [ about how filmmaker Vikas Bahl would behave with her]. Kangana is obviously Kangana Ranaut. She says a lot of stuff and it’s hard to take her seriously. But I love the fact that she has spunk and she says what she believes."

While responding to Sonam's 'it's hard to take Kangana Ranaut seriously' remark - which she made at a Vogue event in Bengaluru last week - the 'Manikarnika' star again raised the issue of nepotism.

"What does she mean by saying, 'it's hard to believe Kangana'? When I am sharing my Me Too story, who gives her a right to judge me? So, Sonam Kapoor has the license of trusting some women and some she won't," said the 31-year-old.

She further questioned as to what made Sonam "so unsure of my claims." 'I am known to be an articulate person and I have represented my country in many international summits. I am called as a thought and youth influencer to these summits, I am not known because of my dad. I have earned my place and credibility after struggling for a decade," the statement by the National Award winning actor read.

Further lashing out at the 'Veere Di Wedding' star, the statement by Kangana said, "She (Sonam Kapoor) isn't known to be a great actress, neither she has the reputation of being a good speaker. What gives these filmy people right to take digs at me?"

Realising things were going out of hand, Sonam took to social media yesterday to play safe. She wrote, "Women need to stand together. Irresponsible media have misquoted me or taken my quote out of context and made other women react. All I want to say is that all I have is compassion and love for you. I'm proud of where I come from and so should every other woman. Let's stand together and speak (sic)."

Earlier, Kangana had lent support to a woman who accused her 'Queen' director of sexual harassment and had even shared her experience with Bahl at the film's sets.

"He partied every night and shamed me for sleeping early and not being cool enough. I often told him off. He was scared of me but still every time we met socially, we greeted and hugged each other. He would bury his face in my neck and hold me really tight and breathe in the smell of my hair. It took me a great amount of strength and effort to pull myself out of his embrace, he would say - I love how you smell K-I could tell something is wrong with him," she had claimed.

Edited by mid-day online desk, with inputs from agencies

Next Story : Arjun and Malaika raise eyebrows as they arrive together at a bash!