Ever since the lockdown was announced, Kartik Aaryan's biggest problem has been whether to go clean or grow a beard 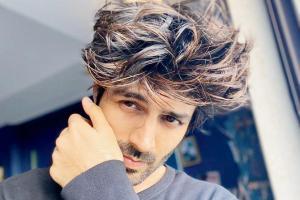 
Kartik Aaryan's obsession with his facial fuzz continues. Ever since the lockdown was announced, his biggest problem has been whether to go clean or grow a beard. Recently, Kartik shared the photograph on Instagram, where he is seen sporting a full sleeved T-shirt and flaunting his trimmed beard and uncombed hair. But it was the caption, which caught everyone's eye. He wrote: "Bulaati hai magar jaane ka nahi."

Kartik seems to be on a beard trail on social media. Earlier with his picture of a bearded look, he had written: "Daadhi bula rahi hai." His new post naturally seems like a follow-up. The caption however left Kartik's fans in a tizzy.

Kartik has been seen sharing a lot of beard posts on social media during the lockdown. A month ago, he even went live on Instagram to ask fans whether he should shave off his beard or not, to which actress Deepika Padukone commented with an emoji of a girl raising her hand. On the work front, Kartik was last seen in Imtiaz Ali's "Love Aaj Kal" alongside Sara Ali Khan. He currently has two films in his kitty -- "Dostana 2" and "Bhool Bhulaiyaa 2".