Lisa Haydon: Having a kid opened my eyes to a whole new world

Lisa Haydon who became a mother in May 2017, says having a child opened her eyes to a whole new world and way of life 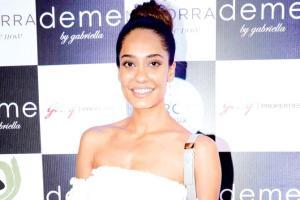 "I was filming a web series till I was five months pregnant. I did the cover of Vogue India with Hrithik (Roshan) when I was four months pregnant... I believe that we are finally arriving at a place where women don't need to have career apprehensions towards starting a family. You can have it all. You might have to run a tight ship and have the occasional meltdown but it's all good," Lisa told IANS in an e-mail.

She welcomed her first child -- son Zack Lalvani -- with husband Dino Lalvani. Lisa, who made her acting debut with a supporting role in the 2010 film Aisha, and has also featured in Housefull 3, has also been appreciated for her role in films like Queen and Ae Dil Hai Mushkil.

She was also part of India's Next Top Model Season 1 and 2 along with Top Model India this year. From being a model and actor to a mother, Lisa says that having a child emphasises the need for schedules and organisation.

"It also becomes quite natural to pick and choose what is most important and then make time only for that as the stakes are higher," said Lisa who also says that one of the self-realisation that pregnancy had on her is that "pancakes taste best with a squeeze of lemon and powdered sugar".

Now that she is back to work and have been shooting and Zack is still little, Lisa says that the balance has been working out nicely.

"I love being at work and have also noticed he also values my presence a bit more when I return home after being away on a work trip," said the model-actress who also feels that today women are accepted regardless of marital status and motherhood, especially in the modelling industry.

"I think the change is already here. I also had a different impression of parenthood till I became one and realised I can still look the same and feel better than before," said Lisa, who also says that it's a proud moment for any woman to flaunt her baby bump.

"It's actually a very special time and feeling," she said.

It's not just films and modelling work that is keeping her busy, she is also a diehard fan of keeping her hair glamorous and hassle free.

Lisa, who has been using luxury hair-care brand Kerastase for more than 10 years, says that she love experimenting with her hair and no new look is complete without the pampering of a haircare brand.

"Additionally, having a trusted hairstylist who can recommend the right products for you is so essential," she said.