Ranveer Singh reveals the much awaited logo of his next '83 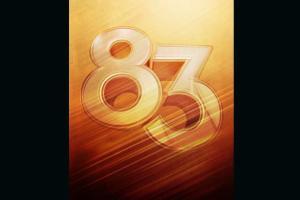 
Ranveer Singh is soon going to be seen in Kabir Khan's '83, which is based on India's first-ever cricket World Cup victory in 1983. Ranveer will be portraying the role of Dev in the movie. The makers of '83 have finally revealed its logo. Ranveer Singh took to his Instagram and shared, "It's coming @83thefilm".

'83 traces the iconic win of the Indian cricket team at the 1983 world cup against West Indies as they made history and picked the World Cup for the first time ever.

Ranveer Singh will be seen playing the iconic Kapil Dev, Tahir Raj Bhasin will be seen as Sunil Gavaskar, Saqib Saleem as Mohinder Amarnath, Chirag Patil as Sandeep Patil, while Deepika Padukone will be seen in a cameo avatar playing Romi, Kapil Dev's Wife. '83, touted to be the biggest sports drama, is being co-produced by Madhu Mantena, Sajid Nadiadwala and Reliance Entertainment. The movie is slated to hit the screens on April 10, 2020.

Next Story : Kabir Bedi takes a stand for Deepika after Smriti Irani's attack