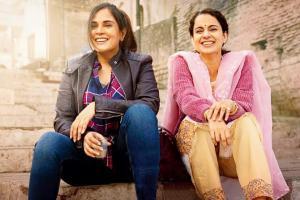 
With Section 375 becoming one of the most talked-about movies and the second season of Inside Edge being lapped up by the audience, it has been a gratifying year for Richa Chadha. Come January, the actor will rub shoulders with Kangana Ranaut in Panga. As the trailer drops today, Chadha says that she was "in two minds" about the project.

"I have a special appearance, but what drew me is the film's central idea that a woman can make a comeback after getting married and having children," she states, adding that she wanted to do her bit to make a case for women in sports. "In the fields of acting and sports, it makes a big difference if you are a woman. Say, as an actor, if I want to get married and have a baby, questions pertaining to what childbirth will do to my body and how long I will have to stay away from work, will linger in my mind.

Women in these fields have to think about their physical well-being. If they want to get back on the field, they need to have endurance and stamina. This idea is conveyed in Panga. It will encourage women to return to sports." The drama required her to tap into her athletic side. "I used to play basketball in college, but for this film, I had to train in kabaddi."

Next Story : Varun Dhawan requested to be part of Muqabala recreation