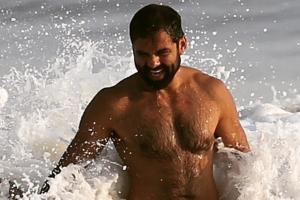 
Abhay Deol has shared that he loves water and salty air, in a new post on his official Instagram account. #sea," wrote Abhay, alongside an image in which he can be seen enjoying in the sea.

Do you prefer the ocean, or the mountains? I love the water and the salty air! #sea

Actress Bipasha Basu took to the comment section and wrote: "I want to be there too." Recently, Abhay in a social media post shared that he went the extra mile in his career to make his own path and called his uncle, veteran star Dharmendra, whom he fondly calls his "dad", his inspiration.

He took to Instagram, where he spoke about nepotism prevalent everywhere. He also shared a picture of himself along with Dharmendra. Abhay was last in the Netflix films "Chopsticks" and "What Are The Odds". In 2019 he made his Tamil debut with the film "Hero".