Aditya Roy Kapur on his looks: Do not want to think about it too much

Aditya Roy Kapur, the immensely handsome star of Malang, says how looks can overpower your craft and how he reads at least once in film reviews how good looking he is. 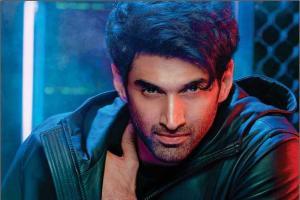 
The general perception of actors is that their look is surely the priority to succeed in the business of entertainment. However, actor Aditya Roy Kapur, who is widely acknowledged as a handsome young man, says at times the good look can overpower the acting skills of an actor.

"I do not want to think about it too much, though in all the reviews I read (there is) at least one line about the way I look. People talk about my look but my appearance is not in my hands, right? If we look at the West, whether it is Brad Pitt, Leonardo DiCaprio, and some other mainstream actors -- they don't get enough credit for their acting skills at times, but their screen presence and how handsome they are (are spoken about). People can discount their acting skills and put it down to their looks. When it comes to me, I have no control over it but surely I want to establish myself as a combination of both," Aditya told IANS.

So, when was the last time he looked at the mirror and said, Wow! Aditya, you are hot!? He laughs. "No, that does not happen. I mean I don't do that -- who does that? I think before the shoot of Malang I saw myself in the mirror once and felt that my body is looking not bad. That is it! I don't know how to answer this question," he blushes while responding.

Aditya's upcoming film Malang is directed by Mohit Suri with whom he has collaborated Aashiqui 2. That film made him a star overnight in 2013.

Asked about how special was it for him to work with Mohit again, the actor said: "One of the reasons the shooting of this film was exciting for me is, I got a chance to try out some new adventure sports. We went to Mauritius four days prior to the shooting, so that we got to learn those sports, at least the basics so that we looked right in the scenes. I learned a little bit of kitesurfing during the shoot and I think I will learn it properly once I take a break. I think I like that sport," shared the actor.

Malang also features Disha Patani, Anil Kapoor, Kunal Kemmu among others, and is slated to release on February 7.