Keeping the audience on their toes, Akshay Kumar has just shared a short clip introducing the movie. 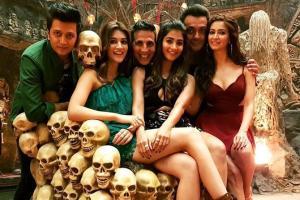 The cast of Housefull 4. Pic/instagram.com/akshaykumar


Fans can't wait for the next instalment of their favourite movie franchise - Housefull. The cast of Housefull 4 including Akshay Kumar, Riteish Deshmukh, Bobby Deol, Kriti Sanon, Kriti Kharbanda and Pooja Hegde are currently gearing up for the movie.

Keeping the audience on their toes, Akshay Kumar has just shared a short clip introducing the movie. He captioned the video: "Gear up for the hilarious ride of #Housefull4 taking you back to 1419 tomorrow, with one after another poster reveal, every hour from 11 AM! Stay tuned."

Exciting, isn't it? We can't wait to see the first looks of all the characters tomorrow! Akshay Kumar's Housefull 4 is a story about reincarnation. The comedy, also featuring Bobby Deol and Riteish Deshmukh, has two plotlines - while one part follows the characters' lives in the present day, another portion is set 500 years ago.

Mid-day has learnt that Akshay Kumar will be seen as a maharaja in the part that deals with the past life, while Bobby Deol and Riteish Deshmukh play his royal courtiers. Turns out, Kriti Sanon, Kriti Kharbanda and Pooja Hegde will be playing princesses in the film.

In related news, Akshay Kumar is all set to turn rapper for the film, too. A source revealed to mid-day, "Farhad Samji, who was one of the directors of It's Entertainment, had convinced Akshay to croon the title track for the comedy. This time too, it was his idea that Akki explores his rapping skills. While producer Sajid Nadiadwala jumped at the idea, the producer-director duo then convinced their leading man to give his nod."

Next Story : Urvashi reacts on video with Boney Kapoor, says it was awkward for him