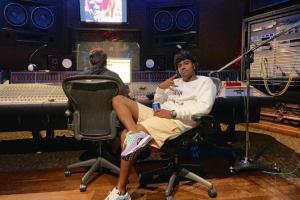 Amith is an Sri Lankan/ American Hip-hop Artist who was originally Born In Sri Lanka. By the grace of his grandmother Amith and his family were blessed to come to America on a green card visa for a better life.

His Hip-hop influences started in middle school as the African American culture took him in as one of their own and taught him a lot about being a minority in American culture while embracing the hip hop community. Amith was fascinated by the culture and felt like he was at home with it. He started slowly cutting through the accent and language barrier difficulties he was facing. Speaking slang every day and hearing his friends freestyle over beat boxing during lunch hours made him study the process that would later lend to his craft.

As the years would go on Amith was able to amass a balanced network of individuals spanning beyond just entertainment, and into areas such as import/export trade, branding and promotion as well as diplomatic ties with heads of state. Amith knew it was important to have a wide range of people in his network because although he left his home land years ago he vowed to bring back resources through business dealings and trade that would improve the lives of those in Sri Lanka. The small nation was overcoming a cease fire of a civil war that had the country in peril for years. He knew it would take the right contacts to help bring the country on a better footing that would be sustainable for years to come.

After years and years of building relationships and seeing who would give Amith an opportunity in Los Angeles, It was by a miracle he came across the Global icon “Akon” at his job. This would eventually morph into the chance of a life time to build a relationship with the international star.

After years and years of hard work, persistent and consistency. Akon in 2020 gave Amith an opportunity to join his team where Amith will be releasing his music. Amith is set to be on Akon’s domestic tour with other major artist.

Along with his affinity for music Amith is a go getter when it comes to all things in his business matters. Whilst most look to get attached or plugged into a business arrangement, he likes to create his own opportunity with one philosophy, to solve problems. Whether it's bringing new technologies to improve the lives of millions, orchestrating major music concert deals, or just being a vocal advocate bringing business opportunities to his homeland and government officials. Amith's multifaceted capabilities to encapsulate a variety of business undertakings affords him myriad of opportunities.