Anupam Kher: 'Talk To A Muslim' a ridiculous campaign

Commenting on the campaign, Anupam Kher said: "I have come from a family who never told me that they are another religion. We have respected all religions and that (#TalkToAMuslim) is a ridiculous campaign 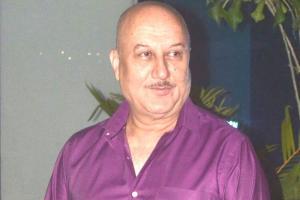 
Actor Anupam Kher has condemned the #TalkToAMuslim campaign on social media, calling it "ridiculous". Anupam interacted with the media at the completion of the golden jubilee year of Central Industrial Security Force (CISF) here on Thursday. Twitter users have been commenting on a trending hashtag 'Talk to a Muslim'. Even celebrities like Swara Bhaskar and Gauahar Khan have shared their thoughts on it.

Commenting on the campaign, Anupam said: "I have come from a family who never told me that they are another religion. We have respected all religions and that (#TalkToAMuslim) is a ridiculous campaign.

"I think it was a campaign which presented Muslims as a small entity, which was shameful thing according to me. We shouldn't hurt anybody's religious sentiments. Today it has become really easy to run a campaign. Each day some new campaign trends on social media. I think we should set the trend by doing our job efficiently. 'I am an Indian' campaign, that should be run in everybody's blood and life."

Anupam sang the national anthem with CISF personnel. "I feel always emotional and proud about people who are in uniforms," he said, sharing how during his childhood days in Shimla, where there was the headquarter of Western Command, saying "Jai Hind" or singing the Indian national anthem became natural.

"Recently, athlete Hima Das also cried after winning gold medal when our national anthem was playing at the award ceremony. So, it's obvious that you get goosebumps when you see your national flag, and the national anthem is being played in the background." On the film front, Anupam will next be seen in "The Accidental Prime Minister", which revolves around the life of former Prime Minister Manmohan Singh.