The premise of Ateet sounds really exciting on paper, but it's the complete opposite when it comes to celluloid execution! 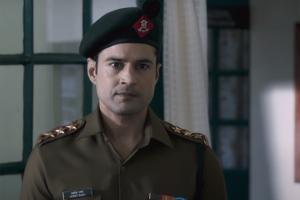 This is how the premise of the new film on Zee5, Ateet, has been described- 'When Captain Ateet Rana goes missing and is declared dead by the army, his colleague Vishwa Karma steps forward to marry Ateet's wife and take care of his daughter. Things take an unexpected turn when Ateet returns after a decade to reclaim his family.' A majority of the filmmakers would opt to make a sloppy and screechy melodrama out of this, but writer Harsshil R Patel and director Tanuj Bhramar add a supernatural and spooky element to it, making it or intending to make it a chilling watch. It's anything but!

Three talented actors- Rajeev Khandelwal, Priyamani, and Sanjay Suri, struggle with one-note characters. The South Indian actress surprisingly delivers such a cold and charmless performance that not even once you feel any sort of empathy for the lady. A scene that involves all three of them, she angrily states that it doesn't matter whom she chooses between them, but that she can leave both of them for her daughter. It wasn't supposed to be funny, but I was left amused. That's what Ateet is basically, unintentional comedy. In another scene, when she declares she saw her daughter talking to someone unlike a human, Vipin Sharma, who plays an army doctor, quips- "You're talking nonsense." Again, the scene wasn't supposed to be funny, but I cracked a smile this time too!

But it isn't entirely unwatchable, there are moments of shock and surprise, and you may jump on your bed or your sofa or wherever you watch this drama-cum-horror. The scares aren't the kind you normally witness in a Bollywood horror film, yes, there is some display of tacky prosthetic but the director keeps the worst for the last. The execution and editing towards the early portions give the film an eery feel and so does the pace of the narrative. But all hopes go for a toss once the plot has opened all its cards.

To worsen what was already beginning to get mediocre and mundane, characters take their own time to communicate and draw long pauses between one dialogue and another to show how intense this drama is supposed to be. It's also upsetting to see an actor like Khandelwal, who made a gripping debut in Aamir, stuck in the same hero-in-horrified mode. He plays an army officer but his heroism is displayed in barely one war scene that's embarrassingly choreographed and ends even more appallingly.

The scene comes when we are close to knowing the truth of these clandestine characters hiding some demonic truths, so who cares about the action set-piece that preceded it? Ateet messes up a delicious plot and makes its central characters appear lost and limp, and this time, I'm not laughing.

Next Story : Wondering how Taimur has reacted to the lockdown? Saif Ali Khan answers