Abhishek Kapoor and Ayushmann Khurrana are joining hands for the first time to do a progressive love story that will touch your hearts. 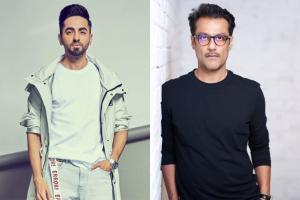 
It is certainly the coming together of two of the biggest creative forces in the industry today. Abhishek Kapoor and Ayushmann Khurrana are joining hands for the first time to do a progressive love story that will touch your hearts. The yet-untitled film is set in North India and it will begin its shooting schedule in October.

Abhishek says, "Ayushmann and I are both known for a certain kind of cinema and this film is a special one for both of us. We want audiences to come back to the theatres and watch movies as a community and for that, we will spare no effort. We strive to bring our best game for this one."

The film-maker says he is going to present Ayushmann in a never-seen-before avatar. Abhishek says, "Ayushmann plays a Cross-Functional Athlete in the film and he will have to go through a physical transformation that he hasn't done before. It's quite a challenge and he's very committed to it.

Ayushmann is excited about creatively collaborating with Abhishek and is looking forward for his physical transformation. "Abhishek has a very distinct voice in cinema today and I'm glad that we finally got the opportunity to collaborate on a project that's exceedingly close to my heart. This film has all the trappings to take audiences through a ride of emotions and it is a total family entertainer. It is a beautiful, progressive love story that will also touch your hearts," he says.

Ayushmann, whose choice of cinema has given birth to a genre in Hindi movies called 'The Ayushmann Khurrana Genre', adds, "I'm supremely excited about the physical transformation that I will have to undergo. It will present me in an all-new avatar. I have never looked like this on-screen and I'm looking forward to seeing the reaction of audiences. The process is going to be intense and excruciating for me but I feel all the pain will be worth it."

The film will release worldwide in theatres next year.

On the work front, Ayushmann Khurrana was last seen in Gulabo Sitabo, also starring Amitabh Bachchan. The film had an OTT release owing to the coronavirus pandemic and resulting lockdown.

Gulabo Sitabo, which was supposed to be a theatre release, was finally shown to the people on the web. The makers released the film on Amazon Prime Video on June 12, 2020. The film tells the tale of Mirza (Amitabh Bachchan) – a 78-year-old landlord, who would move heaven and earth for his most prized possession – an old depleted mansion in the heart of Lucknow. And 'Baankey' (Ayushmann Khurrana), a tenant in this prized mansion, whose shrewdness matches that of Mirza, and with whom he indulges in ceaseless arguments and banter.

Next Story : Sushant's sister Shweta: If truth doesn't matter, nothing ever will