Tiger Shroff starrer Baaghi 2 is loaded with action but is completely devoid of perspective. Watch it only if you are a die-hard action-film fan. 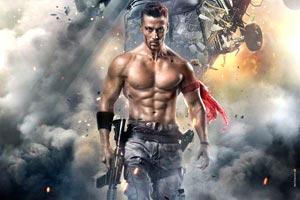 Tiger Shroff and Disha Patani in a still from Baaghi 2

If your idea of having a good time at the movies is Tiger Shroff flexing his muscles and breaking bones, then, my friend, you’re in for a blessed treat at the movies this week. For the rest, I guess, it's better to enjoy the long weekend bingeing on a web series. Baaghi 2 is loaded with action but is completely devoid of perspective.

The film starts in Goa when Neha's (Patani) daughter has been abducted and she reaches out to her college love Ronnie (Shroff), now an Army officer posted in Kashmir, for help. True to any action film, Tiger Shroff makes a grand entry by pinning down three terrorists and also tying one of them to the front of his jeep, using him as a human shield. Looks like the makers decided to pay tribute to Army Major Leetul Gogoi, who had done this in real life. Shroff leaves behind his national duty so that he can help her ex-flame. And from thereon, it becomes a cat-and-mouse game. There are enough twists in the plot about kidnapping, double cross and even deceit, but the problem lies in the sloppily written script and poor execution.

The action directors deserve a mention, but the 'Ramboesque' stunts in the climax sequence are hard to digest. Our desi Rambo sprays bullets and hits the bull's eye with each, but no bullet can pierce his iron body.

Watch the official trailer of Baaghi 2 below

Shroff and Patani have hardly any time to show their on-screen chemistry. Shroff has already proved that he is a solid action hero. However, it’s time he stepped out of the maar-dhaad zone and shone with the aid of an actual script. Disha Patani has little to do as a damsel in distress. Of the supporting cast, Manoj Bajpayee and Deepak Dobriyal are convincing while Prateik Babbar is clearly off the mark. Randeep Hooda as a hippie chillum smoking cop who is called LSD and loves taking selfies shines with his performance.

At 145 minutes, Baaghi 2 seems so long that by the end, I started counting the minutes.... ek, do, teen just like the unwanted remix starring Jacqueline Fernandez. By the end credit, I also remembered that Baaghi 3 is on its way in a few years. This Tiger is going to be alive and kicking.

Next Story : Did Ranbir Kapoor fly down to London to meet Mahira Khan?