Dolly Kitty Aur Woh Chamakte Sitare is no Woody Allen type movie loaded with irony, and male gaze for sure. 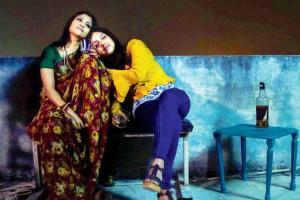 Within the first scene, the Jijaji (brother-in-law) in this film places his finger on the girl's (Bhumi Pednekar's) shoulders. She can sense being touched inappropriately, and promptly tells her sister (Konkona Sensharma) about it. Who, in turn, makes light of the situation, suggesting the young girl herself might have a thing for her man — given her hormonally confused age!

With a start like this, you should be able to predict which way the picture is headed. But, no, this isn't quite taking the Hanna And Her Sisters route, if you may.

This ain't no Woody Allen type movie — loaded with irony, and male gaze — for sure. If anything it's the opposite, which might be for the better.

Only the complete lack of humour is what one could complain about. And that, honestly, class-wise, I wasn't able to economically/socially/convincingly place the two sisters (or cousins) in this film. Especially Pednekar's character — who looks/behaves far too groomed/polished, for someone who's just arrived from Bihar's boondocks; holding a steel trunk on one hand, and the whole world on another, stepping into a city of big dreams.

Okay, maybe I'm misjudging how a first-generation migrant girl from a Tier III town is likely to be. That said, just a few scenes relating to where she's from (Darbhanga) might have given me enough clues to establish the contrast better. Which is?

With the metropolitan boondocks of Greater Noida, that's technically in the National Capital Region, or NCR/Delhi, but is for all intents and purposes, still Uttar Pradesh — when it comes to safety for women, especially when the sun goes down, or even when it doesn't.

Kitty is Pednekar's pseudonym for a sex-chat service, where she works — in a seriously swanky suburban call-centre, calling attention to Right Wing goons. I'd imagine this Red Romance app, with moaning male customers on the other line, to operate more like the one from the Ayushmann Khurrana-starrer Dream Girls (2019; also produced by Ekta Kapoor, as this).

Greater Noida is still fine setting/metaphor for all things concrete yet shapeless, about the great Indian middleclass — navigating through a sea of confusion about all things they once held dear (family values, etc), and can't live with its hypocrisies anymore; while what's new, hasn't revealed itself as a replacement yet.

God knows there are plenty of movies, past and present, capturing this so-called New India, gloriously shining in its dilemmas between men and money, mighty and weak — pulling the rug in the process. What writer-director Alankrita Shrivastava does is lend this familiar narrative a strong feminist voice/take —wholly reversing the gaze that a film like this is likely to have.

Sensharma, at the other end from Pednekar's character, plays a working, mature mom, who's financially independent, yes, but is still within boundaries of a home that she's set for herself — mainly because she has no clue where to go beyond the gaudy 'gudia ghar' (doll-house) for her apartment/cage. Sure there is the novel bit about the typical, metropolitan middle-class and its proverbial mid-life crises, which is usually explored from the guy's PoV.

It's not this film's sub-text that anybody could have an issue with. It's solid. It's the story/plot that follows from it — with half-baked men/children, and women going through all sorts of heart-breaks and heartless turns — that start seeming belaboured/contrived beyond a point.

Or perhaps from the starting point onwards, while you continue to love the movie because you can't tell where it's going. And also not like it for the same reason — that it's just going too many places for you to care. Would have just preferred the camera to stay still more on the understated Sensharma, though — observing her every natural move.