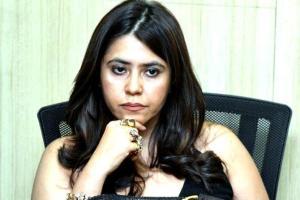 Since Ekta is known for making drama and supernatural shows on TV which is quite opposite of her shows on the OTT platform ALT Balaji and films where she is experimenting with many progressive subjects of the society, she said: "Experiences changed over time, so films have to change based on that. The convenience OTT gives you is the choice that you have now. You don't have to sit through a three-hour movie in a theatre even though you don't like it. Don't like something? Watch something else!"

Ekta was present at the Jagran Cinema Summit on Friday evening.

"Acceptance is the biggest word we should learn. I have as much fun making a show like 'Naagin' as much as promoting a 'Lipstick Under My Burkha'. Mobile is going to decide what people want to watch. They might want to watch both 'Naagin' and 'Narcos' or a romantic movie or a thriller, there's a whole world out there!" she added.