Taapsee Pannu decided to put a stop to her verbal spat with Kangana Ranaut after realising that things were going out of hand. 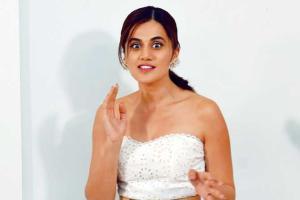 
On Tuesday, Taapsee Pannu decided to put a stop to her verbal spat with Kangana Ranaut after realising that things were going out of hand. "I'm gonna sign out of this before I forget ki mera stand kya hai," she tweeted.

For a while now, the two have been indulging in verbal volleys, especially after Ranaut's sister, Rangoli Chandel, called Pannu "a sasti copy of Kangana." The war of words escalated after Kangy referred to her as a B-grade actor and said that she wants to be in the good books of the "Bollywood mafia" as she has to "pay her bills."

In case you missed it, the insider-outsider debate has taken the social media ablaze. Taapsee Pannu, Swara Bhasker, Anurag Kashyap and many other B-townies have been debating over nepotism, and this argument has been shifted to an entirely new tangent. As per the recent update, Thappad actress shed light on how this practice will never fade away and how the outsiders also have to milk their advantages the way star kids use theirs.

In the media interaction, Taapsee shared, "But it will be wrong to say that one is not aware of it beforehand. And once you are aware of the challenges, you will be facing, you make sure you develop the strength to deal with it."

The actress further added, "If star kids milk their advantage, I don't understand why don't we outsiders rely on our strength and use it to our advantage as well? We have the largest relatability factor with the audience, we have their support constantly because they feel we are one of them."

"No matter how many countless discussions or debates we are going have on it, it's never going to go away, so it's better we learn our ways and means to deal with it and our audience and media becomes smart, unbiased enough to give us an equal opportunity, and a chance to get their love and attention," Taapse Pannu concluded.

On the professional front, Taapsee Pannu made her Bollywood debut with David Dhawan's comedy, Chashme Baddoor, in 2013. Critics and audiences appreciated the actress' work in the industry after Neeraj Pandey's Baby in 2015. She then went on to do some critically acclaimed and commercially successful films like Pink, Mulk, Manmarziyaan, Badla, Mission Mangal, Game Over, and Saand Ki Aankh.

Now, Taapsee Pannu is gearing up for projects like Loop Lapeta, Haseen Dillruba, Rashmi Rocket, and the Mithali Raj biopic.