Janvi Kapoor's Gunjan Saxena landing on OTT on this date!

Janhvi Kapoors Gunjan Saxena is all set to land on Netflix on August 12. Heres what the actress has to say about being a part of the film and what the character means to her! 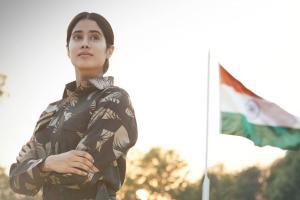 
Gunjan Saxena- The Kargil Girl is the story of India's first woman Air Force Officer. And this eponymous character is being essayed by the Dhadak actress Janhvi Kapoor. Taking to her Instagram account, she has now shared the release date of the film. It's all set to stream on Netflix from August 12 onwards.

This is what the actress penned about playing this character and being an integral part of the film- "Proud to bring to you the story of India's first woman Air Force Officer to go to war. A journey that I hope will inspire you the way that it has inspired me. GunjanSaxena - The Kargil Girl is landing on 12th August to your Netflix screens." (sic)

Proud to bring to you the story of India's first woman Air Force Officer to go to war. A journey that I hope will inspire you the way that it has inspired me. u00f0u009fu00a4u009eu00f0u009fu008fu00bbGunjanSaxena - The Kargil Girl is landing on 12th August to your #Netflix screens! @dharmamovies @zeestudiosofficial @karanjohar @apoorva1972 @pankajtripathi @angadbedi @vineet_ksofficial @manavvij @sharansharma @netflix_in @zeemusiccompany

The film also stars Angad Bedi and Pankaj Tripathi, who plays the role of her father. This drama was all set to release on March 6 in the cinema halls and was later pushed to April 24. But now, the film is directly streaming on the OTT platform due to the Coronavirus pandemic and the lockdown that happened post that.

Apart from this film, Kapoor also has Dostana 2 with Kartik Aaryan and debutant Lakshya coming up and will also be seen in Karan Johar's directorial, Takht. This period drama that also stars Anil Kapoor, Kareena Kapoor Khan, Ranveer Singh, Alia Bhatt, Vicky Kaushal, and Bhumi Pednekar, is slated to release on December 24, 2021!