The makers of Gunjan Saxena: The Kargil Girl have just dropped the trailer of the film starring Janhvi Kapoor as Indias first female airforce pilot in combat. 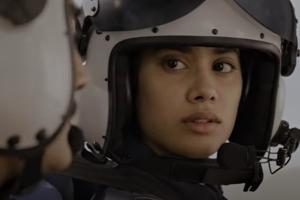 Janhvi Kapoor in and as Gunjan Saxena


Fans of Janhvi Kapoor can now rejoice as the actress has just shared the trailer of her upcoming biographical film - Gunjan Saxena: The Kargil Girl. The film, about to be released on Netflix on August 12, tells the inspiring tale of the first Indian female airforce pilot in combat.

Watch the trailer of Gunjan Saxena: The Kargil Girl below:

Janhvi Kapoor shared the trailer of her film on Instagram and wrote, "Gunjan Saxena: The Kargil Girl Trailer! Finally the part of the journey we’re we can start sharing this story that we've all been so honoured to be able to tell. Here's the look into the world of #GunjanSaxena - The Kargil Girl. I hope you like it!"

Gunjan Saxena was all set to release on March 6 in cinema halls but was later pushed to April 24. But now, the film will be directly streaming on the OTT platform due to the coronavirus pandemic and the lockdown.

Next Story : Shweta Tiwari's daughter Palak opens up on her Bollywood debut