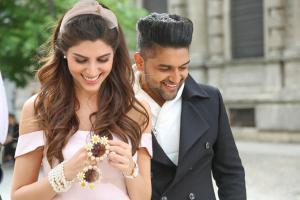 
T-Series artist Guru Randhawa, who is currently riding a massive popularity wave has surpassed 3 billion views across all official channels on YouTube. Currently, he is the most viewed Indian artist in history.

T-Series chairman and managing director Bhushan Kumar, who has been instrumental in successfully reviving the trend of singles has played a pivotal part in the singer's success. The music head honcho, who is always scouting for new talent first signed him up in 2015 for the hit track Patola. Since then brand Guru and brand T-Series have only become stronger, witnessing an exponential growth.

Guru Randhawa is a significantly popular independent artist who has a sizeable number of trending songs to his credit like Suit Suit, High Rated Gabru, Lahore, Ban Ja Rani, Made In India among others. Within a short time, tracks of Guru Randhawa have broken all records in India. The artist is not only making records for himself but also for Indian music industry.

An elated Guru comments, "I am thankful to everybody for their love and support. I feel it is for the first time in Indian history that an independent artist has acquired 3 billion views. I'm honoured and blessed for all the support from listeners worldwide who have supported my music. Every artist wishes to achieve this kind of success. I'm thankful to God for this day. This wouldn't have been possible without everyone's support."

On his association with Guru, Bhushan Kumar adds, "It is indeed a proud moment when a talent from your company scales such heights. Guru's success reinstates my faith in independent music and in my belief to support new, aspiring talent."

Meanwhile, Guru Randhawa has more than 5 million followers on Instagram with an ever-growing fan base.

Next Story : What? Nawazuddin Siddiqui did Manto for Re 1?