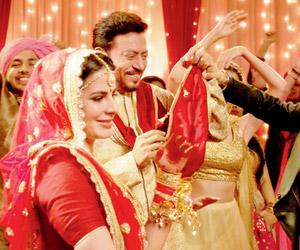 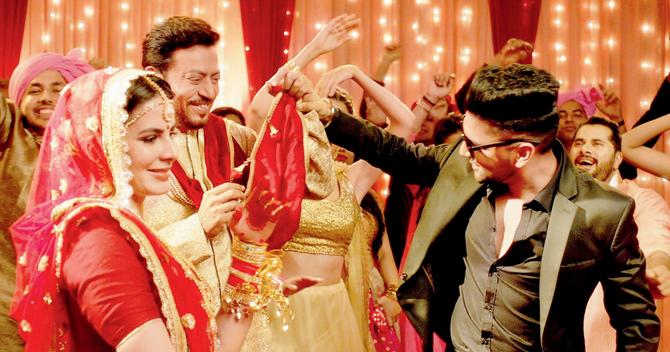 Kirti Kulhari, Irrfan Khan and Guru Randhawa in the song from Blackmail

mid-day had earlier reported that Punjabi sensation Guru Randhawa was recreating his 2015 chartbuster, Patola, for Irrfan Khan's upcoming film, Blackmail. It has now been learnt that the song, which marked his breakthrough in the world of music, has been reimagined as a wedding number in the Abhinay Deo-directed movie. Featuring Khan and Kirti Kulhari along with Randhawa, Patola marks the musician's second collaboration with the actor and T-Series head honcho Bhushan Kumar after they enjoyed a hit in Suit Suit from Hindi Medium (2017).

Says a source, "The film kicks off with Irrfan's character finding out that his wife, played by Kirti, is having an affair. So, the song has been shot in such a way that it's an extension of the same idea - it sees Irrfan as the groom watching, as his bride Kirti flirts and dances uninhibitedly with Guru. It's a peppy track that has been shot against the backdrop of a mandap."

Well aware that Patola had catapulted him to stardom overnight, Randhawa says that he hopes the rehashed version too works its magic with the audience. Talking about working with Khan for the second time in two years, the singer-songwriter says, "While we had shot for Suit Suit in Georgia, this one was filmed in Mumbai. We've brought a Punjabi flavour to the song. I hope Patola receives as much love from the audience as our previous song did."

Randhawa also showers praise on the director for bringing his aesthetic sensibilities to the track. "With his understanding of colours, lighting and skin tone, Abhinay's treatment of the song is on par with international videos."

Next Story : Oscars 2018: Jimmy Kimmel continues with his hilarious bunch of jokes