Housefull 4: Funniest thing about the film is that it thinks it's funny

Housefull 4 isn't just the least watchable film of the franchise, it's also the unfunniest and uniformly infuriating film of recent times! 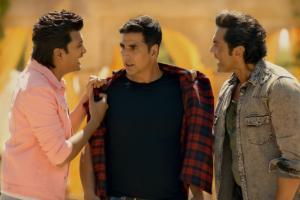 I don't know how much of Housefull 4 has been directed by Sajid Khan and how much by Farhad Samji, I do know they both have failed miserably in making a watchable film, let alone funny. We won't talk about the plot as the trailer and the promos have given away what the film is about. Every film based on reincarnation bases its narrative on love, subterfuge, rebirth and revenge. Housefull 4 ticks all the boxes, there's absolutely no novelty or imagination at display.

If the makers think running gags about pigeon and pig poop are funny, they all may have graduated from the Sajid Khan school of filmmaking, the master of puerile and asinine humour. If Heyy Babyy had a diaper flying in slow motion towards Akshay Kumar's face and the disgust that followed, Housefull 4 has multiple montages of the actor's face covered with a sty, until you begin to squirm with disgust and discomfort. This is a monstrosity of the highest order.

The leading man delivers what is his most unforgiving performance in recent times. His ode to the nation via his nationalistic and patriotic films is far from great, but this attempt to veer into the space of comedy again is nothing less than a major misfire. The makers borrow Johny Lever's gag from the Golmaal Films and give it to Kumar, but it's neither sharply performed nor cleverly exploited, only infused to amplify the film's already farcical material. Kumar was in good form when the last Housefull came out, this time, it seems he has forgotten the art of timing, has his patriotism rusted his comedic avatar?

There's nothing that works, not even Deshmukh and Lever's effeminacy, or Chunky Panday's Akhri Pasta, a character which has already exhausted its lunacy long back. The ladies, as it has always been the case with this franchise, continue to be ornamental and romance their philandering and promiscuous men. And they cannot be blamed, it's the Housefull franchise, after all, releasing on Diwali and starring a star whose current record suggests he's on the road to infallibility. Who would say no?

I wasn't expecting anything great as that would have been a sin in itself, all I aspired for is a good time. But given the fate of Bollywood over the last few years, particularly during the Diwali period, I erred more than the entire team of this reincarnation comedy. Come to think of it- Ra. One, Son Of Sardaar, Krrish 3, Prem Ratan Dhan Payo, Thugs Of Hindostan, and now Housefull 4. All these titles are grand in visuals, bland in everything else. In one scene, Sharad Kelkar says, "History always repeats itself." How could I forget?

Next Story : Alia Bhatt has the sweetest birthday wish for mom Soni Razdan