The lead female part belongs to a young actor who goes by the screen name Alaya F. She seems supremely confident and naturally at ease, for a debutant holding her own, standing alongside veterans Tabu and Saif Ali Khan. 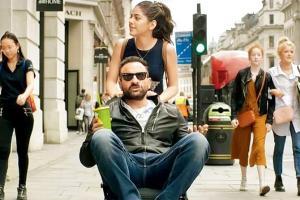 A still from Jawaani Jaaneman

This is an urbane coming-of-age film. Except the person coming of age, is 50! How do you reconcile that with reality? Hell you can. Look around you closely on any given day/night — especially at bars, house parties, etc — and you might just find yourself surrounded by overgrown man-children from Generation X (born between 1965-79), grappling with existential issues on life and responsibilities, more common among 20-year-olds few decades ago.

Look closer still, and you might notice how there's physical de-ageing going on among folk well past their 40s as well. They just seem so much younger in general (and I say this for women too). The lead character in this romantic comedy of sorts is one of them.

This film is also what you'd call an NRI picture — primarily about deeply rooted, non-resident Punjabis settled in the West — something you saw a whole lot of, late '90s onwards. And see so little of lately, given realism of small-town India appears to have replaced the gloss of 'gore-gaon' (White Town) in Bollywood.

So don't be too surprised when desi actors talk in Hindi, giving two hoots about whether the gora they're talking to understands a word of it. This reverse imperialism used to be par for the course once upon a time! Must say I did cringe on one scene over this, though.

But frankly the sequence that follows — of a 50-year-old guy, hitting on a 21-year-old girl at a nightclub, taking her home, seducing her with his moves, into what turns out as the father meeting his daughter for the first time — more than makes up for anything that you may not care for in this film. That scene's a gem.

And there's only one reason why it works. Because Saif Ali Khan plays that quinquagenarian party animal. Replace him with any other Bombay actor of the same vintage, and you run a genuine risk of the old commitment-phobe coming across as a creepy, lustful, paedo uncle on the prowl, preening around a pretty young thing, in ways that makes one think he needs mental help. No such fears with Saif. Years haven't still taken the sheen off his swag.

Besides, this is a true-blue NRI, Bollywood rom-com. And while Saif has indeed experimented with films/parts for far longer, and far more than some of his contemporaries, the fact is the metro-sexual hero, with a roving eye coupled with romantic charm, is the sort of role he was born to do, and kill with. As he does here.

Should anything else matter then? Just the fact that the picture, otherwise quite well-written and smartly directed, at some point, descends into the preachy and predictably maudlin space, shedding its consistently humorous tone. Maybe that's just to give the picture some gravitas to be taken seriously; when, really, what's the point?

Especially when you have Tabu banging it with her expressions, and the funny lines, in a role that's sadly much shorter than in the Ajay Devgn-starrer De De Pyaar De (2019), which was also similarly about a middle-aged, single man's woes. The lead female part belongs to a young actor who goes by the screen name Alaya F. She seems supremely confident and naturally at ease, for a debutant holding her own, standing alongside veterans Tabu, Saif.

Who's she again? Am told actor Pooja Bedi's 22-year-old daughter. Pooja Bedi, the national crush? Wasn't it just yesterday that we were all swooning over her as the high school hottie in Jo Jeeta Wohi Sikandar (1992)? Okay thanks, but no thanks, for reminding me of how old I am now!