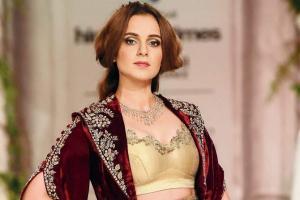 
Kangana Ranaut says being an actor is the most privileged job in our country while filmmakers are not as valued as they should be. Ranaut's observation came while she was commenting on the controversy that erupted when she took over the directorial reins of her 2019 release, Manikarnika: The Queen of Jhansi. She was in the capital to promote her upcoming film Panga, directed by Ashwiny Iyer Tiwari.

"There was no panga. The director left the film [and] I completed it. It was just that. If I helped my producer [and] studio, toh uss cheez ke liye mera sammaan hona chahiye. People should see me [as] responsible. I got many brickbats and I am shocked. Being an actor on set is the most privileged job. [Being] a director, I am sorry to say, and even Ashwiny will agree, is not as valued as it should be.

Filmmakers in our country, unlike America, are literally de-valued. This industry is of the actors." Ranaut also said that she wants to pursue her film-making ambitions. "There is a part of me that wants to pursue film-making, but, it is a privilege to be an actor on the set." Panga also features Neena Gupta, Richa Chadha and Jassie Gill. The film, slated to hit screens on January 24, revolves around a kabaddi player who wants to make a comeback in the game, after motherhood.

Next Story : 'One cannot survive in Bollywood without focusing on entertainment'