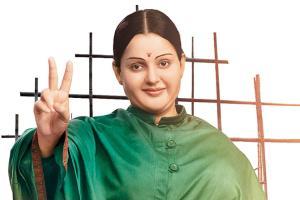 Kangana Ranaut in a still from Thalaivi


After a long wait of over two months, Bollywood will gradually resume shoots from June 15, following the guidelines that have been laid down by the state government. Even as stars and filmmakers have begun charting out their schedules, Kangana Ranaut will have to wait a while before reporting to the set of her ambitious multi-lingual Thalaivi. Reason — the climax of the J Jayalalithaa biopic requires her to shoot with a crowd of over 300 people, which is at odds with the current guidelines.

With only 25 days of shoot remaining, director AL Vijay was keen to kickstart the shoot at the Ramakrishna Cine Studios in Hyderabad. "In the climax, Kangana will be seen stepping out of the legislative assembly as a crowd awaits her. The makers wish to film the sequence on a large scale with 350 people. However, the current guidelines suggest that only 33 per cent of the original crew strength can be present. Since the makers intend to shoot the remaining portions in a start-to-finish schedule, they have decided to hold off the entire schedule until it is safe to shoot with a crowd," reveals a source.

mid-day reached out to producer Vishnu Vardhan Induri, who did not respond until the time of going to press.