Laila Majnu is a breathtaking film with performances that near perfection. The climax, however, doesn't weave things together, failing to tap into the magic that the folklore hold. 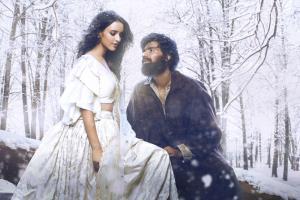 Over the years, Imtiaz Ali has set a benchmark with his films. Apart from the novelty factor, his offerings are able to leave one emotional on many levels. When Ranbir Kapoor looks at a sun-kissed Deepika Padukone in one scene of Tamasha, he mutters, "Mujhe pata hai, Teja ka sona tere paas hai." I remember feeling satisfied watching two lovers taking a shot at their happily-ever-after.

Laila Majnu, by the very nature of the folklore, is an anti-thesis of this conclusion. Yet, the gratification feels familiar. Even though Ali hasn't helmed this work, letting brother Sajid be the captain of the ship instead, Laila Majnu has his trademark qualities. It comes as a pleasant surprise after Jab Harry Met Sejal, which lacked the depth that Ali's writing harbours. The filmmaker revisits the legend of star-crossed lovers in the mystical land of Kashmir and adds a contemporary twist to it. If you are a die-hard romantic, the Ali brothers have a fresh pair with winsome chemistry on offer. That the screenplay is astutely written enhances this experience.

Our Majnu self-admittedly compensates for his lack of good looks with his cockiness. Our Laila is a pampered princess, well-aware of her beauty and ability to get men drooling over her. Yet, as stars would have it, she finds herself drawn to the forbidden man. The Ali brothers adhere to censor pressure by keeping the sexual undertone limited. Sajid carves his lead characters with care and keeps the grandeur intact. Newbies Tripti Dimri and Avinash Tiwari are suitably naive, and hence, charming and delightful. They bring the required lunacy of love into their acts.

It's a breathtaking film with performances that near perfection. The climax, however, doesn't weave things together, failing to tap into the magic that the folklore holds. The makers' take on the fable is laudable. They retain the poetic quality. This weekend, lose yourself in the madness of love.

Also Read: Imtiaz Ali: I Didn't Direct Laila Majnu Because Shades Of The Story In My Earlier Films