Laxmii is a remake of a Tamil film (presuming a hit) called Kanchana (2011), that was a sequel by the same director (Raghava Lawrence) of a film called Muni. 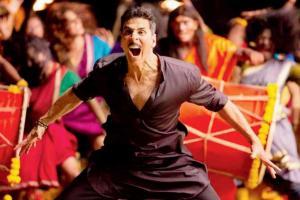 A still from Laxmmi

This film pretty much starts with the scene of a witch-hunt in Haryana. By which I don't mean the sort of witch-hunt that plays on national news on Indian TV. But an actual witch-hunt, where the proverb comes from. Which I guess is the ancient act of banishing women, by ascribing them characteristics of a witch — with supernatural powers that could hurt society. Call them chudail, if you will.

God knows if this practice is still prevalent. Its metaphorical equivalent certainly is. Akshay Kumar walks into the real witch-hunt scene, to save a girl from the clutches of a fake tantric. Here's the thing though.


Akshay plays a member of a rationalists' association in this movie that is altogether obscurantist by nature — feeding fully into the fact that there is indeed a ghost that, in this case, probably gets into the hero's body, while the hero goes around tormenting everyone, including his family as a result. Not sure why.

Frankly all supernatural movies expect audiences to believe in the paranormal. So one mustn't be shocked on that account. This one is a remake of a Tamil film (presuming a hit) called Kanchana (2011), that was a sequel by the same director (Raghava Lawrence) of a film called Muni. Haven't seen either. Honestly, looking at this remake, doesn't seem like have missed much.

I know everyone usually keeps going on about how the original was much better. Well this is supposed to be a horror-comedy, that doesn't scare you for even a second. And frankly there is nothing to laugh over/about, even if you consider that, let alone a scene, any of the characters were supposed to be funny.

For instance, the heroine's Hindu father (Rajesh) who can't stand the fact that his daughter is married to a Muslim. He is the seedhe-saadhe Akshay, and so the bigot baap starts to accept him after all. What does it have to do with the rest of the movie? Nothing.

Or that this film shines a light on the plight of a transgender protagonist, which is what Akshay transforms into — a reason some may have been excited about this subject, in the first place. This whole back-story plays out like a totally unrelated half hour or so of a film, within the film, with nothing really adding up.

These are aspect in line with Akshay 2.0 movies that, more often than not, deliver a social message, along with massy entertainment. Sharad Kelkar plays the transgender character as well. An actual transgender person in this role at least would've been genuinely transformative for the community, no?

Which isn't to say Kelkar isn't excellent, he usually is. Nothing still matches up to Ashutosh Rana from Sangharsh (1999), while Laxmii (originally titled laxmmi Bomb), a bull bhulaiya of sorts, looks and feels — by way of camera work, production design, characters/performances — considerably more dated than the '90s.

Let's just say that while this typically wannabe Bollywood blockbuster type has directly dropped on Hotstar+Disney, it's just way too over-the-top to merit an only-OTT release. The only place I could see this finding some favour among audiences are probably North India's single-screen theatres.

What would I love to catch with that crowd? Okay, maybe not the hero doing a 'Jai Mata Di' jagrata version of Gully Boy's Apna Time Aayega. Maybe, that maha/grand number picturised before Dubai's Burj Khalifa, with the wife singing to her husband, 'Mundya dilade mainu Burj Khalifa (boy, buy me Burj Khalifa)'!

Kiara Advani plays this wife. Guessing the last time she and Akshay paired in a film together, Good Newwz (2019), the 'todu' track was, 'Dilade ghar Chandigarh mein (buy me a house in Chandigarh)!' Clearly, as a screen-couple they've been through an upgrade.

Speaking of Kiara, I only recently learnt (thanks to Wikipedia) that her true-life name is Alia, which she had to change for screen, because there's already an Alia Bhatt in Bollywood. Look closely though: every scene, you'll find her gently mimicking Deepika Padukone. Which is fine, except she has no scenes! Laxmii is basically Housefull 4, without even the jokes for them to work, or not. Boy, buy me Burj Khalifa.