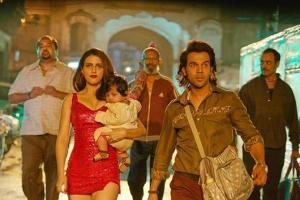 A still from Ludo's trailer. Image sourced from mid-day archives

There's basically so much simultaneously happening in this film, between so many characters over several storylines, that more than once, the screen splits three or four ways, simply to give you a sense of where we are, at any given point of the scripts' timeline. Usually, this sort of split-screen is a lead up to an interval.

Make no mistake. There is no break here. And at no point, do you wish for one. Because you're firstly struck by a series of beautifully constructed moments—by way of lights, colour, and shadows; background score, locations, and production design; a casual shot here, that lovely interlude there…

There is a certain level of scalable aesthetics—what's labeled form/craft—that one has come to expect from Anurag Basu's films. Ever since even Murder (2004), which was in effect a sex romp (decidedly a B genre, if you may). Whether or not his films thereafter—Kites (in English/Spanish), Barfi (silent), Jagga Jasoos (theme-park adventure)—have wholly moved/touched you is another matter. He has filmed wonderful ideas before.

This is beyond doubt his most accomplished, intricate screenplay—along with some subtle gems for lines on love and life. For whatever it's worth, that acknowledgment/review (for a script) needn't have waited for the film to release, or drop (on Netflix, as it were)—if you simply consider the cast that said yes to it.

Check out the trailer of Ludo here:

Pankaj Tripathi plays an adorably dreaded don, leading a pack of morons. Abhishek Bachchan was once his trusted deputy; he's quit his job. Rajkummar Rao—his looks/manners probably modeled on the late actor Razak Khan—is a Romeo, love-struck with the same girl (Fatima Sana Sheikh) since school. Aditya Roy Kapur is a ventriloquist, who has Sanya Malhotra for a friend, with benefits.

While there are even more actors that I haven't mentioned, with almost equal screen-time, just look up that stellar line-up again. Each one, Tripathi included, basically plays solo-leads in films/series, wholly centered on them.
What are the chances they'd manage anything more than an extended cameo in a hyper-link movie, with all of them bunched together, over a running time that's hardly over a couple of hours? They evidently saw in the script (more likely, in the director) an opportunity to shine on their own, still. And, frickin' hell—they do!

Ludo melodiously starts with the old Albela (1951) song, 'O Babuji, kismat ki hawa' in the background, and a cold-blooded murder on screen—of a builder called Bhinder, shot at point-blank range, by the don, in his bath-tub. This death sets off a series of events around everyone in this film, who are otherwise going about their lives in other directions altogether.

The four main characters/plots metaphorically represent the four quadrants of the Ludo board. So much happens to every character, mostly to do with deaths and destruction—and they carry on still as if not much has—you're aware this is a fantasy space.

Also Read: Abhishek Bachchan: Being A Part Of The Anurag Basu Film Ludo Was No-Brainer

Cities like Bhilai and Ranchi do have names, but you can't tell one from the other. Even the car number-plate says Ludo! And there's only one cop investigating all the crimes/cases, relentlessly piling up in this fictional universe. The epaulette in the police uniforms simply says, Police—not Maharashtra, Madhya Pradesh, Bombay, or Calcutta Police—just police!

The setting, therefore, is like the malleable Aloo—as Rajkummar Rao's delectable character in the film refers to his own name: "Fits into (both) chaat or biryani". Of course, only a Bengali writer-director, Basu, who's also shot this film, even briefly acted in it, will associate aloo with biryani!

Ludo is basically a suspense thriller, fully choreographed like a Bollywood style musical. A better word to describe it is a pop-culture pastiche, which in most films turns into pasta since you can't consequently concentrate on the story being told between the amazing soft-focus shots. That is not the case here, since the film remains just as deeply focused on the narrative; taking the story forward, as it were.

Sure you might even lose your chain of thought/storyline here and there— wondering where you started from, who's who, where you are, and where you're headed—between multiple sub-plots. But you just want all of them to continue—building brick over a brick of an atrangi world, that you're happy to stay inside for as long as you can. Have watched it twice, so I know!

Also Read: Sanya Malhotra Talks About Her Experience Of Working Without A Script In Anurag Basu's Ludo

Next Story : 'Had casted late Asif Basra as I wanted an intelligent actor'