It's a kickass, quick scene. It's there in the promo. That's what one sometimes wonders. Why can't some of these films be left at the snazzy trailer? I'll take that man. 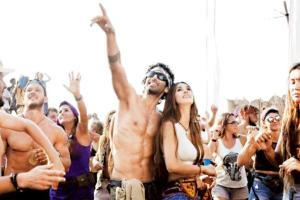 A still from Malang

Have to tell you, was quite excited about this movie. Why? Well, why else is anyone ever excited about a new pic anyway? Because of its promo. Projected on the big screen, blasting background score, with psychedelic colours thickly laid over two hot humans tripping over the sea, and under the clear blue sky, is the kinda stuff that hooks you right away. Looked like a fine concert video to me.

Especially if you consider the flickering images on the screen that those in the know will instantly recognise as momentary, horizontal distortions in your vision/eyes when you're tripping on substances that will never be made legal for a good reason. Because they're just too good to be true. And humanity has a lot to lose, en masse, if it decides to lose itself in the collective haze of chemical substances.

Or, maybe we'd be happy to. If, like the hero (Aditya Roy Kapur) here, and more so the heroine (Disha Patani), we woke up looking like fresh daisies during the day, despite getting shit-faced on hard drugs all night. I want to be them, yo; through and through.

But how to? If only we knew these pretty young things better. Here's what you're likely to learn about them, as an audience, watching them gallivanting either on the beach or on a bike, having met for a quick second once, after a police raid at a rave, after which they simply can't take their eyes (and hands) off each other.

They have no ghar, no thikana, no naukri, full-income, no maa-baap, of course; but a gorgeously nomadic Goa life that can only be interrupted by hanging with goras in the hills instead. The guy is both a beach and a mountain person. Good to know. This film isn't about these two though, really. Wish it was a surreptitiously pro-drug picture.

Except, every time folk in the film land themselves stuff that Goa runs on, according to the movie, "X, stamp, Charlie, Molly, stash," a bumper sticker shows up on the side of the screen, "Drugs cost you more than just money," "Drugs kill pain, but finally the brain," etc. Accha.

And then the focus shifts to two cops. One's Panaji ka Lakhan (Anil Kapoor) wearing a khakee uniform shirt, buttoned-down over regular clothes, chasing dead bodies. The killer, that's the hero (Kapur), who's stepped out of prison, informs him of his target. There's another cop, totally nondescript type in comparison (Kunal Kemmu), whose colleagues
are turning out to be the targets.

There is no gang or syndicate at work. Not that you know of. This lasts overnight in real-time that still seems shorter than the length of this supposed thriller. There is certainly no motive that is likely to intrigue you either. Except, a huge 'reveal' at the end. Which only reveals how moronic this movie really is. But that's another matter.

Don't let such stuff distract you from some fine filmmaking flourishes, to be fair — as the chant 'Alla hoo' plays for background score, before a packed football stadium with a match going on, on Christmas, and a body drops on top of a parked cop-car, thrown off by the hero from the terrace above.

It's a kickass, quick scene. It's there in the promo. That's what one sometimes wonders. Why can't some of these films be left at the snazzy trailer? I'll take that man. There should be a running script for a full, two-hour feature, too? Arrey, who says so. It's okay.

Next Story : For Vicky, being in love is the best feeling; what's he hinting at?