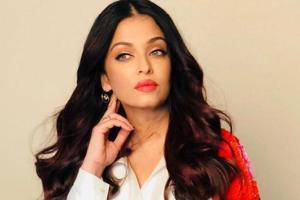 
Celebrated actress and former Miss World Aishwarya Rai Bachchan looks at the #MeToo movement gaining momentum as a positive sign and she believes that talking on women empowerment should be a continuous process.

"I think it is a good sign how the #MeToo movement is gaining momentum. However, I would refrain to comment on any specific case as that would be irresponsible on our part. At least some of these cases would become sub judice soon. So, I don't think it would be proper to talk about any particular incident," Aishwarya told the media on Tuesday.

The actress was present along with designer Sabyasachi Mukherjee for the launch of the new makeup line festival collection named "L'Oreal Paris X Sabyasachi Calcutta" for the special media interaction.

Referring to the cosmetic brand L'Oreal, she said: "We started the 'We Worth It' award and I became the poster girl of that. I came on board because we are speaking for women, giving them a platform for appreciation of their efforts by a wider audience."

The 44-year-old actress believes that speaking up for women to help them find a voice is a continuous process and that the social media is helping them find an audience to share their story.

The "Guru" fame actress said: "I have spoken and will continue to when it comes to speaking for women...ever since I have got the microphone in my hand, right from the platform of Miss World (pageant).

"Since the world is becoming a smaller space where social media is bringing people closer and anyone from any part of the world can share their story and find interested people to listen to them," said the mother of a six-year-old daughter.

Catch up on all the latest entertainment news and gossip here. Also, download the new mid-day Android and iOS apps to get the latest updates

This story has been sourced from a third party syndicated feed, agencies. Except for the change in the headline, the story has been provided "AS-IS," "AS AVAILABLE, without any verification or editing from our side. Mid-day accepts no responsibility or liability for its dependability, trustworthiness, reliability and data of the text. Mid-day management/mid-day.com reserves the sole right to alter, delete or remove (without notice) the content in its absolute discretion for any reason whatsoever